Better late than never right?! Ill explain all in my next post but for now let’s get into what I read in February.

To Kill a Mockingbird by Harper Lee 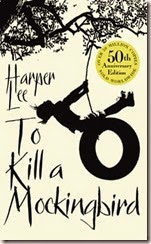 Anyway, I feel like I shouldn’t even have to write anything about this book as it’s so well known. It follows the story of Scout, a young girl living in a racist town in the 1930s in America. Scout is a brilliant narrator, it’s great to see things through her eyes. I was hooked in by this book and devoured it.  I don’t know why it took me so long to read it! 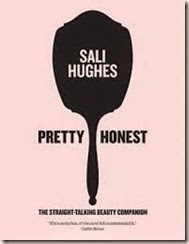 I love Sali Hughes’ YouTube channel. I’ve mentioned her In the Bathroom series before on the blog. Sali is a no nonsense beauty writer for The Guardian. You know there is no bullshit from Sali, she has no problem speaking her mind. I’ve often seen her say that she hates when people put down women who love fashion and beauty, that heaven forbid that a woman cares about how she looks or that just because she loves lipstick she doesn’t have a proper opinion on more serious items. And she’s bloody right too! Sali’s book is packed full of all the tips and tricks she’s learned over the years. She makes sure not to come across too preachy, there aren’t many ‘rules’ that you’ll often see other beauty sources spout. Sali covers hair, makeup, face routines, bodycare and a whole host of other things. I especially loved her stance on hoarding ‘good stuff’. You know, that expensive bottle of perfume or jar of moisturizer, the stuff you keep for times that are ‘worth’ it, so not to waste it on the everyday. Sali says sod this, that nice things are supposed to be enjoyed and if you wait around, the item might go off or worse still, you might not be around to enjoy it. So enjoy it while you can!

Hyperbole and a Half by Allie Brosh 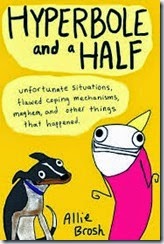 I’d seen some Hyperbole and a Half comics online before and always laughed. When I kept coming across good reviews online, I decided to give it a go. I really enjoyed it. Some stories weren’t on par for me, possibly because I’m not a massive dog person and there’s a few dog stories. However the part on depression hit the nail on the head for me. I feel like people who don’t understand what it’s like to be depressed should read this as a lot of it resonated with my experiences. It’s not all doom and gloom. The story about the goose had me in stitches laughing, serious out loud, I-can’t-breathe-I’m-laughing-so-much laughs. So loud that my boyfriend had to come downstairs to see why I was laughing so much. And then I narrated the story to him and we both laughed. I’ll probably buy this book just so I reread that goose story. If you’re a fan of the online comics then you’ll definitely enjoy this 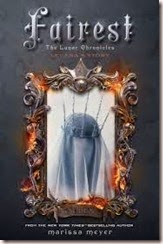 So the final book in the Lunar Chronicles doesn’t come out until the end of the year but until then we have Fairest, a bridge story between books 3 and 4. It follows the life of Levana, before she became Queen and what has made her the way she is now. It was interesting to see into the life of the villain, I feel too often in fairytales we don’t get to know much about the villain’s past and they’re often the most interesting part of the story! This book definitely makes you understand Levana more, possible even making you feel sorry for her at times, but she does pull off some pretty horrible things! If you’re a fan of the Luna Chronicles and want to know more about Levana, then check this out.

Scott Pilgrim and the Infinite Sadness by Bryan Lee O’Malley 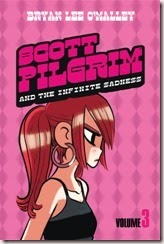 The third volume in the Scott Pilgrim series, following Scott who has to fight all the evil exes of his girlfriend Ramona. Except this one is a bit more complicated as this ex is now the boyfriend of Scott’s ex girlfriend! It felt good to continue on the story but this is my least favourite so far. I will continue this series to the end though as there’s always little details that make me laugh. 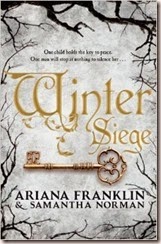 When I was first contacted by the publishers to review this book, I hesitated at first, as historical fiction is not really my thing. But I read the blurb and it stuck with me, so I decided to give it a whirl. It’s set mainly in 1141 in England and we’re introduced to Em and her family, when the men of the village are told they are needed to go fight in the war for the throne between Matilda, the daughter of the last king who has no brothers to claim the throne and wants to be Queen and her cousin Stephen who believes he should be king. One day red haired 11 year old Em is chased by a gang of mercenaries who are being lead by an evil monk who has a preference for red haired females. Gwil, another mercenary, sees this happening and prayers that the girl gets away. Later that day, when Gwil is taking sheltered in a deserted village, he comes across Em, half naked and half dead, clutching onto a scroll. Taking pity on her, he nurses her back to health, having her pose as a boy named Penda, and trains her to being an archer. They travel around the country with a group of performers but soon find themselves in the middle of the civil war. Em has no memory of her attacker or what happened to her, but Gwil knows the monk is dangerous and that he is on the hunt to retrieve that scroll and finish the job of killing Em. I really enjoyed this book, the reason I decided to give it a go was because there was a Ayra and The Hound from Game of Thrones vibe about the story. I liked the story and relationship between Gwil and Em, Gwil was especially fond of Em at times which was sweet. I also liked the story of the civil war, it kept me interested and helped drive the whole story on. At times some of the writing seemed a bit off for the time period. Not that I was expecting the writing to be very off or more in tune with the vernacular at the time but every now and again a turn of phrase through me a bit, but not enough to put me off the entire book. I liked the characters too and the monk was a great villain. If you want to read a historical fiction book that isn’t about being in the court of kings and queens of the Tudor times (at least, that’s where my mind goes to when I think of historical fiction!), then give this a go! 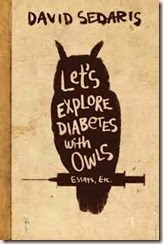 This is my first experience with Sedaris, I decided to give the book a go as I it was available as an audiobook from my library. It’s a collection of essays where Sedaris makes observations about his life, from childhood to present day, without any real theme running through the book (which is fine with me either way). Sedaris is a witty writer, I did enjoy hearing about some of his quirks and about his childhood too (like the fact his father used to just take his trousers off after work and hang around his house in his underwear) but the book didn’t have me splitting my sides like I thought it would. Maybe because it was hyped up, maybe because I should have started with another book of his, who knows. Don’t get me wrong though, I did chuckle in places and overall I did enjoy it. Especially because Sedaris read it himself which I always enjoy in an audiobook and it hasn’t put me off him. I am looking forward to picking up other books of his so I’d gladly accept suggestions please!

Number of eBooks- 2 (Fairest and To Kill a Mockingbird)

Number of books borrowed from library- 4 (Hyperbole and a Half, Pretty Honest, Scott Pilgrim and Let’s Explore Diabetes with Owls)

A Pulitzer Prize winning book- To Kill a Mockingbird

A book with a One Word Title- Fairest

A graphic novel- Scott Pilgrim and the Infinite Sadness

A book of short stories- Hyperbole and a Half

That’s it for Feb! I’m pleased with the amount I managed, it feels like I’m getting back on track with reading again.