Hello! Last month I split my monthly reading round up into two parts. Part 1 was about graphic novels and short stories, part 2 was everything else I read. And this month I’ve read a lot of graphic novels again so I’ve decided to split my post. 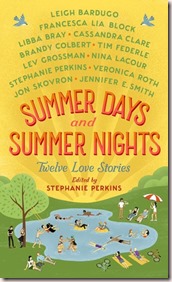 At Christmas time I read My True Love Gave to Me so I was excited to summer version of the book was coming out, I put it in my 2016 Anticipated Books. The title is Summer Days and Summer Nights, I LOVED the nod to Grease! As with My True Love Gave to Me, Summer Days and Summer Nights is a collection of young adult short stories set in summer by various authors (all different to the winter book, except Stephanie Perkins). It's a nice book to pick up to get you in the mood for summer, or at least the dreamy hazy YA version of summer! I wasn't a fan of all the stories but like with MTLGTM I was ok with this. There was still plenty I enjoyed and I love the fact that a book like this gives you a chance to explore new authors and see if you enjoy their style. My favourite stories were Last Night at the Cinegore by Libba Bray, Good Luck and Farewell by Brandy Colbert, A Thousand Ways This Could All Go Wrong by Jennifer L. Smith and The Map of Tiny Perfect Things by Lev Grossman. As with MTLGTM, I read this book in order but you can read it in whatever order you want, that's the fun of a book of short stories. A light fun way to kick off summer! (P.S. If you were a fan of Marigold and North in My True Love Gave To Me, you get to see them again here as Stephanie Perkin's story centres around them!) [NetGalley] 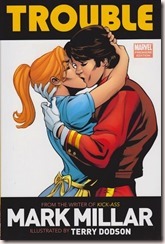 I spotted this on the shelf at my library and it intrigued me. Trouble is the story of friends Mary and May who go to work one summer in the 60s at a fancy resort for the rich. Here they meet other people their age up for fun and frolics on their time off. Mary and May get involved with brothers Richard and Ben and it’s not long til there’s plenty of sex and scandals! This book reminded me a bit of Dirty Dancing, of what the workers get up to when they want to blow off steam. While I liked the drawing style, I wasn’t a massive fan of the story. At the end, if you pay attention you’ll piece together what this book implies about a famous Marvel superhero which caused controversy when it came out. I take it with a grain of salt, it was interesting idea but nothing amazing.

Chicken With Plums by Marjane Satrapi 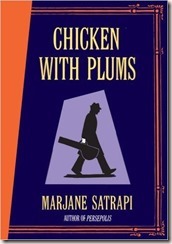 Nasser Ali Khan is a celebrated tar player, in a desperate search for a new tar after his is broken. Unable to find one that makes the same beautiful sound as his previous one, he decides life is not worth living and goes to bed to die. The book follows the next 8 days while he waits, telling us what happened each day, what fragments of his past Khan thinks about that day and sometimes flashforwards of what’s yet to come for some of the family members. I enjoyed the setting, 1950s Iran. I always enjoy Satrapi writing about this setting and I love her drawing style. It’s a beautiful tale about love, family, politics and passions. Kimberly Keiko Cameron, a.k.a. Skim, is a bit of a misfit at her all girls private school. Bi-racial, not skinny, wannabe Wiccan goth with only one real friend, Skim is trying to ‘find herself’. After developing a crush one her female teacher, this adds another piece of the puzzle Kim is trying to figure out. When the ex-boyfriend of one of the popular girls takes his own life, the school is mourning and in an effort to perk things up, the popular crowds start a club called Girls Celebrate Life! As the story goes on, Kim sinks more into a state of depression and melancholy and drifts apart from her friend. The drawing style and colour palette of the book really help to add to this melancholy. While the book tackles plenty of issues, nothing is ever too preachy and it all just seems like a teenager going through normal things teenage girls go through. I wasn’t overly keen on how the crush on the teacher went and I didn’t find the book breath-taking or amazing, but I did think it was a solid representation of the emotions of a teenage girl, a decent coming of age story set in the early 90s. 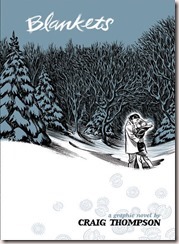 Blankets is a massive graphic memoir by Craig Thompson, over 500 pages. Craig and Phil are two brothers living in the countryside of Wisconsin who as young boys shared a bed and hated it. They come from a very religious family and this crops up a lot in the book, with the boys going away at Christmas to Christian youth camps. Here Craig meets Raina and falls in love, going to visit her for two weeks. During the journey Craig battles with his feelings with Raina and his relationship with God and religion. This book is stunning, the drawings are beautiful. The book is so sad at times, the guilt and shame Craig battles with as he tries to figure out what kind of adult he wants to be and how God fits in in this life. Other things add to this guilt and shame and the book is very sad at times. I did love seeing how the relationship between the brothers develops during the book, how they fight, how they play, drift apart as teenagers but support each other. I loved the scene where Craig asks to see Phil’s drawings. I can see why people love this and while I enjoyed it, I think I might have preferred it as two books.

The Gigantic Beard That Was Evil by Stephen Collins 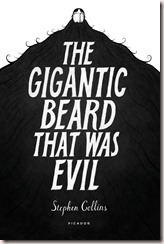 The island of Here is very neat and tidy, everything and everyone is in order. No chaos here please! Beyond the sea is There, where chaos and disorder reign and no one from Here has every been to There and lived to tell the tale. As a result, the people of Here fear There. Dave is a prime example of Here, all presentable (bald, except for that one hair on his chin), goes to work and spends his evenings sketching and listening to The Bangles. Until one day when that single hair on Dave’s face starts to grow along with more and a giant unstoppable beard takes over Dave’s life, as well as the island of Here. I thought it was a fun story, you could read into story and the hidden meanings to what happens or you can just read it as simply an evil beard that takes over the island! 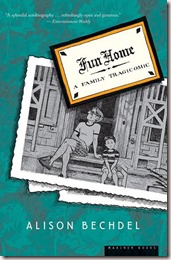 Fun Home is the story of Alison Bechdel and her relationship with her father. As a child, this relationship was mixed, often tense as her dad sees his kids as people to help him do work in his beloved fixer-upper grand house and their funeral home (which is where the title Fun Home comes), his often shifting mood and not letting Alison wear what she wants. But there are times of happiness too, with Alison sharing her love of books with her father. When Alison goes to college and comes out as a lesbian, her coming out is overshadowed when her mother informs her that Alison’s father is gay too. Weeks after this revelation, Bruce Bechdel is hit by a truck and dies. Alison is left coming to terms with her own sexuality, her father’s sexuality, her father’s suspicious death (accident or suicide?) and Alison’s relationship with her father over the years. Bechdel uses literary classics like Ulysses by James Joyce, Proust and the works and life of F. Scott Fitzgerald to draw compares to her story, bringing back in the love of books. This was another book I liked but didn’t love, which I felt was the overall theme of all the graphic novels this month (except Trouble, which I thought was just ok). I just felt like I didn’t resonate with me, but I can see how others would love this and why it’s in the list of essential graphic novels to read. It is well worth checking out (and if you think the name Bechdel is familiar, it might be because you’ve heard of the Bechdel Test for woman in films, which Alison created. It goes as follows: does the film have at least 2 woman characters? If so, do these woman ever talk? And is this conversation about something other than a man? To read more about it you can click here for the Wikipedia link).

Stats and roundout for the month to follow in the next post with the rest of the reviews. Hopefully it’ll be up soon. Do you like these posts broken up like this? Or would you rather the entire month in one post? Let me know below!