June was a quiet enough month for me reading wise. I was on holiday in LA for 2 weeks at the beginning of the month and after returning home there was a bereavement in the family so it’s been an eventful month. I did manage to finish a few books though so here they are.

Hark! A Vagrant by Kate Beaton 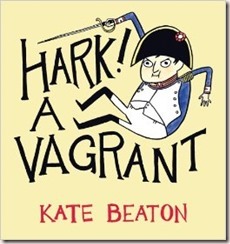 I had requested this from the library a few months ago but the copy is missing so I never got to read it. Boo! Luckily the friend I was staying with on holiday had it on her bookshelf so I read it before bed one night. Kate Beaton has a history degree and she uses that as one of her influences for her comics, along with pop culture references. This made me laugh out loud, it’s very clever at times! I particularly like the Nancy Drew covers explained. You can check out Kate Beaton’s work at www.harkavagrant.com 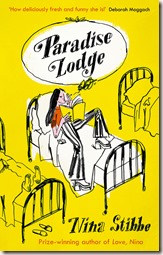 Paradise Lodge sees the return of Lizzie Vogel, now 15 years old, last seen in Man At the Helm. Lizzie has just got a job in a nursing home which is on the verge of shutting down when the owner's wife leaves and starts up a rival nursing home. Lizzie immerses herself in trying to keep the home afloat, to the detriment of her school work, as well as trying to cope with her family and her new crush on her friend's boyfriend. I thought it was a sweet story, I didn't love it as much as Man at the Helm, I felt like the Lizzie from that book had changed. Though let’s be fair, it's probably because Lizzie is now a teenager and that perfect mix of childlike naivety and grownup attitude is gone and replaced with teen angst. I did think that closer to the end I had refound old Lizzie's voice and gotten to like who Lizzie was now. And while we're talking about voices, this has Stibbe's classic mix of charm, humour and darkness. We don't see a lot of the chaos that we see in the first book, mainly because Lizzie doesn't spend as much time at home as she's working but we do still see her eccentric mother and her destructive side at times! An interesting and different take on a coming of age story. [NetGalley]

Step Aside, Pops by Kate Beaton 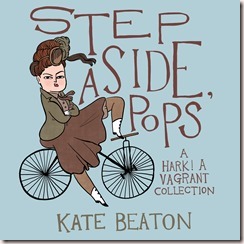 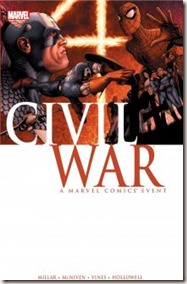 Unless you’ve been living under a rock you’ve heard of the Avengers. I wanted to read this before seeing Captain America: Civil War but only got around to reading it after. Nonetheless it was still worth reading as there are some differences between this and the film adaptation (which always happens) and I enjoyed the drawing style in here. There’s way more characters in this too, some I’m not 100% familiar with so I think someone with more knowledge of the Marvel Universe would appreciate some of these inclusions more than me. But even if you’re more familiar with the films than the comics, it’s still worth checking this out. As to whether the book or the film is better, each have their own merits. I will say I probably preferred the film, partly because I don’t know a lot of the other characters mentioned or their history. And also because it does a better job at amping up the tension between the two sides. However this book does show the X-Men and Fantastic Four, who belong to a different studio and therefore never show up in the Captain America or Avengers films and it was nice to see a broader look at the Marvel Universe to see how these heroes fit into it too. 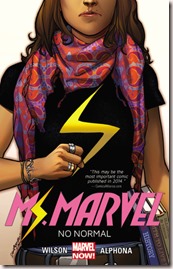 Ms. Marvel follows the story of Kamala Khan, a nerdy teenager from Jersey City. One night after sneaking out she gets hit by a mist that gives her powers to shape shift, which she uses to change into her hero Captain Marvel (Carol Danvers) and saves a classmate. Kamala now must come to terms with having a super power and how to use it as well as being a teenage girl and a Muslim too. I thought it was a good introduction to the character, I liked Kamala and I love the idea of a young teenage female Muslim superhero. The story didn’t blow me away but like I said it’s a good introduction to Ms. Marvel and I look forward to picking up the next few volumes.

We Should All Be Feminists by Chimamanda Ngozi Adichie 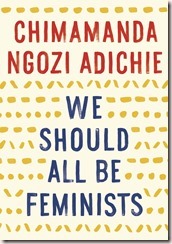 This essay is adapted from Adichie’s TEDx talk, something I have yet to watch (I’m dreadful when it comes to watching things!). But when I spotted it for 99p on Kindle (as of writing this it is still this price so have a look!) I decided to buy it. It’s a very short read, I read it while waiting in the car for my Mum one morning but it hits on some important points. I think it’s a great starting point for anyone hoping to read up on feminism or to introduce teenagers to writings on feminism. In fact, Sweden agrees with me because every teenager in Sweden is to receive a copy of this!

Grunt: The Curious Science of Humans at War by Mary Roach 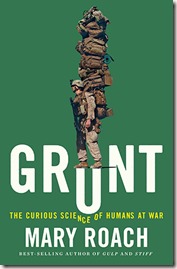 I listed this as my most anticipated book of 2016 and like other Mary Roach books, it’s definitely a good ‘un! I bought this the day it was released in a great little indie bookshop called Skylight Books in LA and read it throughout the month. It took me a while to get through but that was more because I didn’t want to rush it! In this book, Mary investigates how the military uses science to tackle some big problems it faces (clothing issues, diarrhoea, infections from wounds, sleep deprivation to name a few) and speaks to experts and scientists who are trying their best to solve these problems. I love Mary’s writing on subjects, she always makes it interesting and accessible. She doesn’t go in depth, each chapter is more a snapshot on the chapter focus. To be in depth, each chapter would need to be it’s own book. But it does whet the appetite and has plenty of interesting content that will have you saying ‘did you know….?’. If you liked Packing for Mars by Mary Roach then you’ll probably really enjoy this one!

Number of eBooks- 2(Paradise Lodge, We Should All Be Feminists)

Read a book that was adapted into a movie and watch the movie. Debate which is better- Civil War

And that was my short June! Half the books I read in May but still more than I thought I’d get read. If you’ve read any of these or want to know about a book leave a comment below!