Man at the Helm by Nina Stibbe Book Review 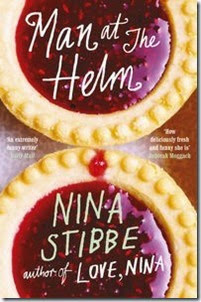 It’s not a secret that I loved Nina Stibbe’s first book (Love, Nina), which is a series of letters she wrote to her sister when she was living as a nanny in London. So I was excited to get my hands on her first fiction book (which she mentioned about starting years ago in Love, Nina).

I first requested this from NetGalley, where it sat waiting forever to be approved, so I got it from the library. Half way through my approval came through, so I finished it with the ebook copy as it was more convenient for me.

Man at the Helm tells the story of three siblings Lizzie (the narrator, 9 years old), her older sister and her younger brother, Little Jack and their mother, Elizabeth. Set in the 1970s, Elizabeth Vogel is forced to move to a small village with her children, who immediately take a dislike to the family due to Lizze’s parents recent divorce. Convinced that if they can just get their mother to settle with a man, Lizzie and her siblings decide to set up a Man List, a list of potential partners for her mother and new Man on the Helm. They set to work getting their mother together with some of these men, often writing letters pretending to be from their mother, inviting the men around (ah, the days before texting!).

I know the description sounds a bit light,a ‘parents divorce, so children try to get a new husband for mother’, that it could be akin to a Parent Trap type of film, where there’s lots of japes and everything works out splendidly in the end. But it’s not like that at all. This book is very humorous at times (as I expected, seeing the amount of times I laughed through Love, Nina) but it is very dark. As a mother, Elizabeth is not there most of the time. She obsessively writes plays, thinly veiled accounts mirroring her own life. She spends days in bed without getting up, takes medication to try and ‘fix’ herself and drinks heavily. She doesn’t cook regularly or do washing and when she does get together with men from the Man List, things never go to plan. Especially her relationship Charlie and the whole Bluebell the Donkey situation. It was especially heart breaking to see how that affected the children and how clueless Elizabeth seemed to be. But at the same time, it was clear that she did care for her children and there was lots of sweet moments with them.

Lizzie is 9 at the beginning of the book and I just loved the narration. I thought Stibbe nailed the balance of childlike perspective and grown-up attitude Lizzie has. The fact that this book is semi autobiographical probably helps this. The children are very independent and while the situation is less than ideal for most the book, they seem happy most the time and are very good friends with each other. It’s hard for them to go from a comfortable middle class background to barely scraping by (thanks to their mother’s incompetence of handling money) and while you do feel sorry for them, you don’t come away at the end of the book with an overwhelming feeling of pity towards them. If that makes sense? The book, while dark, does have it’s bright moments and that’s what I took away most from the book.

I did read another review saying it’s sad to see a story this day and age where the woman needs a man to complete, even if the story is from 1970s. I never got that feeling from the book. Yes, it would have been more unacceptable to be divorced in 1970s (and I say that this is definitely part of the semi autobiographical influence of this book) and the children were trying set their mother up so they wouldn’t really be outcasts in the village. But I felt it was more saying something about how naive the children are, thinking it could fix everything.

I felt this book was along the lines of Marian Keyes. As I mentioned before, I always avoided Keyes as I thought she was fluffy chick lit, but she has so much more dimension, writing very funny books that touch on serious and important issues and develop characters wonderfully.  If you’ve avoided the book as you thought it might just be some disposable chick lit, RECONSIDER! Stibbe has written a book that is hilarious at points, serious and tender at others and has wonderful characters. It can swing from laughing at some trivial observation in the Vogel household to having your heartstrings tugged to back to laughing again. A wonderful read.

As mentioned, this book was partly provided by NetGalley. As also mentioned, I had already started reading the book before being approved, which clearly shows that I was interested in reading this book in the first place. Opinions are my own and I was under no obligation to provide a review.