The other day I posted part one of what I had read in April, which was all the graphic novels and short stories. You can read that here. Today is all the other books I read! 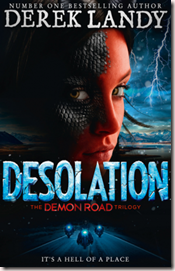 Desolation is the follow up to Demon Road, which I read last month. After tricking the Shining Demon, Amber and Milo must go to Desolation Hill in Alaska, where you can hide from the Shining Demon for unknown reasons. I was surprised at how quickly Amber and Milo ended up in Desolation Hill, I thought there would be more travelling and thought it might get boring if they got there early in the book. But there is plenty of action from why the town has a forcefield that keeps out the Hounds of Hell, to the mystery of The Narrow Man, to Amber's parents showing up again. The book is similar to the first one in that there's it constantly feels like problem-solved-new problems etc. but at least it doesn't fall into the boring, which some 2nd books in series tend to do. For a YA book it is pretty full on. There's lots of swearing, gore and sexual references (nothing too graphic though). I will say I'm not sure how I felt about the whole Amber and Kelly situation, purely based on the fact that Amber is 16 and Kelly is an adult (19/20). There's lots of new characters in this and it felt a bit crowded at times to be honest. Overall it's another fast fun read, a bit more disorganised compared to the first one but it'll be interesting to see how the third book progresses. (NetGalley)

Morgue: A Life in Death by Vincent DiMaio and Ron Franscell 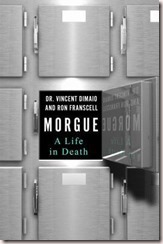 Morgue is an insight in the life of criminal pathologists. When I first saw this book, I thought it might be about the day to day life as a medical examiner, while talking about some of the big cases mentioned in the blurb. Instead we get the life story of DiMaio, as told through the biggest cases he worked on, while weaving in his personal life, starting as a boy in Brooklyn who follows his father's footsteps into criminal pathology.

The book is separated into chapters which focus on one big story (like the Trayvon Martin case and the exhumation of Lee Harvey Oswald) or a theme which speaks about a few different cases (like how looks can be deceiving, that a suicide can look like a murder). We get the background story of the case and then DiMaio will tell us his involvement with the case in the capacity of an ME and also describes other aspects such as what happens in the courtroom. The book isn't heavy with technical language, so if that's something that can put you off with books surrounding medical or scientific books don't let that put you off! It is quite graphic though, there is a lot of descriptions of these cases and as some of them are about children dying and being murdered, this might not be for you if this kind of thing upsets you easily. The book flows nicely and I found it to be a quick read, I was engrossed every time I picked it up! The sheer amount of big cases just goes to show that DiMaio was clearly someone who was an expert in his field and someone who's opinion is still respected even though he's retired. If you like true crime or if you're a big fan of crime shows on TV and want to know more about what really happens, pick this up and give it a go! (NetGalley)

Rosalind Franklin: The Dark Lady of DNA by Brenda Maddox 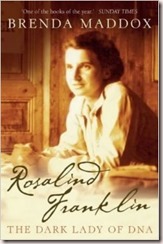 Rosalind Franklin should be a house hold name. Her X-ray photographs of DNA helped Watson and Crick with their insight into DNA (which won them a Nobel Prize). These photographs were shown to them without Rosalind’s knowledge. To add to the insult, Watson’s book The Double Helix painted Rosalind in a horrible light, an unpleasant, unattractive and unhelpful woman. This book shows a bigger picture of Rosalind, of her childhood to her interest in science, becoming an established scientist in the area of coal before moving onto DNA and viruses, before dying at the age of 37 from cancer. I found this book pretty balanced, it showed that Rosalind could be frank, didn’t suffer fools and probably did come across badly to some people. But to those who knew her, she was generous and a great friend. I loved seeing her interests in travelling and cooking. The science aspect of this book is manageable, it wasn’t too heavy but if it is something you struggle with, just take it slow and you’ll get through it. One gripe I had was any time the author quoted something in a different language, it wasn’t translated. As I had studied French in school, most of the French phrases I understood but it was still a bit frustrating. Overall though I enjoyed it, perfect balance for a biography, detailed but not too long.

The Art of Being Normal by Lisa Williamson 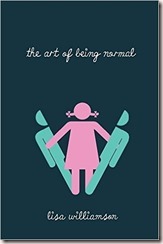 David is an outsider, with few friends and is picked on by school bullies. He hides a big secret, one he wishes to tell his family about. While David was born a boy, for years he has known he’s a girl. Leo is new at school and has one wish: to keep his head down, stay invisible and keep out of trouble. When David is being humiliated in front of the entire school, Leo stands up for David and punches the bully. From then on David persists in being friends with a reluctant Leo and we discover the reason why Leo has changed schools. I loved this book, I devoured it in one sitting. It of course deals with transgender issues but there’s so much there as well. It hits the nail on the head of what it’s like to feel different and dealing with families, friendship, being bullied and struggling to fit in. The story is told from a dual point of view, with David and Leo taking turns at being the narrator. I thought it was a sweet story, enduring book, a must read for lovers of YA.

Animal: The Autobiography of a Female Body by Sara Pascoe 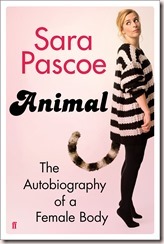 This book looks at many different aspects for what it's like to be a woman. Sara looks at evolutionary and physiological reasons for things like monogamy, falling in love and breakups, sex, why our bodies have developed over the years and how our hormones affect us. Sara looks at these issues from a modern and social perspective too and peppers in her own experiences and anecdotes. This book doesn't shy away from issues either, covering things like rape, body image and eating disorders, female genital mutilation and a drawing of female genitals. Of course, seeing as Sara is a comedian, this book is witty and humourous and had me laughing out loud a few times. You can read my full thoughts and review of the book here. (NetGalley) 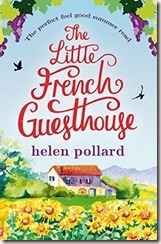 Not going to lie, this bright cover was the reason I was first interested in this book! Emmy's relationship with her boyfriend Nathan seems to have lost its shine so Emmy suggests they go on holiday. They go to the beautiful La Cour des Roses, a guesthouse in the Loire valley in France. The book opens with Emmy looking for Gloria, the hostess of the house, because Gloria's husband Rupert has collapsed. Emmy finds Gloria in bed with Nathan! When Gloria and Nathan run off, Emmy is left heartbroken, trying to make sense of the events. To take her mind off things (and plagued with guilt) Emmy helps invalid Rupert run the guest house. This was a sweet book, perfect for getting swept up in the pretty French setting. I liked the mix of characters, it's great to see Emmy regain her confidence and self belief. I flew through this book, I read it in two sittings. If you're a fan of Jenny Colgan or Lindsey Kelk then you'll enjoy this French adventure! I look forward to the 2nd book, I was glad to see this is going to be a series! (NetGalley)

Sofia Khan is Not Obliged by Ayisha Malik 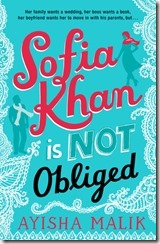 Sofia Khan is Muslim and a hijabi (much to her mother’s dismay, who thinks she’ll never find a husband if she continues to wear a headscarf). Sofia works in publishing and gets asked to writing a book about Muslim dating. Having just got out of an engagement, Sofia is reluctant but agrees. What follows is Sofia joining a Muslim dating site, going on speed dating and dealing with her ex-fiancee. I mentioned this book in a book haul post in January. This book has been described as the ‘Muslim Bridget Jones’ and there are a lot of comparions. The book stands up on its own though. It isn’t just about dating and religion, we see other issues like family, friendships and racism. I found it very entertaining. Sofia is strong but flawed too, which I think makes this book work. I really liked the family and friendship dynamics too. I enjoyed an insight into a culture I don’t know much about and hope there is a second book as I would snap it up straight away!

Death of a Red Heroine by Qiu Xiaolong 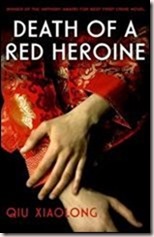 Set in Shanghai in 1990, a body has been found outside in a canal outside the city. It turns out to be the body of a Model Worker, prominent member of the Communist Party. Chief Inspector Chen is assigned to the case and told to keep party authories informed of this case which could turn very political. This book was interesting and different read for me. Chen is an interesting character, he’s not only a cop but a poet and book translator. He finds himself stuck in an awkward position, of wanting to investigate this case to the very end, regardless of politics (and his own personal future) and also trying to toe the Party line and do what’s best in the interest of the Party. We see how difficult it is at times to operate in this closed system. I liked seeing the relationship between Chen and his work partner blossom, as well as all of Chen’s other relationships (I wish we had seen a bit more of Overseas Chinese!). The book is peppered with a lot of poetry, which at times I found a bit tiresome but it does add to Chen’s poetic personality. The book also mentions bits and pieces of modern Chinese history, a lot I wasn’t fully aware of so it was interesting to find out more of another country and culture. The book is definitely a different take on detective novels but an interesting spin and I’ll probably check out the second book in the series.

Read a biography (Not autobiography or memoir)- Rosalind Franklin

And that’s April! It was a busy month but that’s mainly because of the graphic novels and short stories (don’t forget to check out the previous post if you’re interested to see what else I read this month). Please let me know below if you’ve read any of these or if you have any questions!

This post continues digital advanced reading copies from NetGalley. I am under no obligation to post reviews and all opinions are my own.