For the first time, I’m splitting my reading roundup into two posts! I managed to read 16 books in January which I’m pretty happy with. Nice solid start to my aim of 90 books for 2016 and a nice solid start to the Book Riot Read Harder Challenge.

I mentioned this in my recent book acquistions post, I bought it for one of the Read Harder challenges. I picked it as I’d heard about the series from Rincey and it sounded interesting. 5 best friends spending their summer at the Lumberjane camp where they kick ass against all sorts of strange animals and monsters and solve mysteries. It was short but it’s a good starter to the series, it has me interested in reading more.

The Body in the Tower by Y.S. Lee 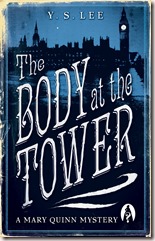 This is the second book in The Agency series. I read book one, The Spy in the House, back in September and enjoyed it. It has spying, a strong female lead AND it’s set in Victorian London, it’s right up my alley! There’s something strange going on at the building of the new clock tower at the Houses of Parliament and Mary Quinn is sent in undercover to the building site as a boy apprentice to try and find out what’s happening. The book was fun and developed the main characters of Mary and James more than the first book. There’s two more books left in the series which I can’t wait to read. 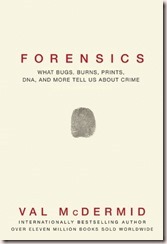 Forensics is an area that has interested and intrigued me for years now. I love watching crime shows though I am aware of the major artistic license these shows take when it comes to processes. Val takes a different aspect of forensics in each chapter and talks about the history of the field, talks to modern experts in that field and tells us about cases over the years where this field of forensics has helped or hindered cases. These fields are the ones you'd probably automatically think of when it comes to crimes (fingerprinting, crime scene investigators, pathologists, toxicologists, DNA analysis) but also other fields you might not have released (entomology, blood spatter analysis, digital forensics, what happens in courtrooms). I love that Val shows the positives and the negatives of all these techniques and fields. The writing doesn't bog you down or feel 'heavy' like some non-fiction science books can, in fact I flew through the book as I found it so interesting. While reading the book, I knew a lot of the information that came up but that's not too surprising considering the other books, podcasts and videos I've consumed around the topic of death over the years! It made it no less of an interesting read though, If you like crime books or shows or have always wondered what actually happens behind the scenes of a crime investigation, then this is the book for you! (NetGalley sample)

Red Queen is about a world where you are divided by blood type- Red and Silver. Red bloods are the lowest in society, barely even surviving. Silvers have special powers (being able to control elements, read minds, and super strength to name a few) and even the lowest of Silvers lead comfortable lives. Mare is a 17 year old, who's only talent is pickpocketing and knows that when she turns 18 she'll have to join the army, like her three older brothers. Though a turn of events leads her to getting a job in the palaces summer home and it turns out that despite her Red blood, she has Silver powers. She must hide in plain sight, pretending to be a long lost Silver princess and learn the world of the Silvers, knowing that one misstep would be fatal for her. I enjoyed the book, once it got going the pace kept up and it was quick to read, I was really interested in what was going to happen next. The book ended on a big cliffhanger and I'm really looking forward to what happens next! (NetGalley sample)

Rebel of the Sands by Alwyn Hamilton

I kept seeing hype for this book coming out so I decided to give it a shot. I like YA and I like magical elements so I thought why not. I loved the spin on this though, the Western setting and feel. It made a refreshing difference to the dystopian YA fiction which is out there. Amani has nothing going for her in Dustwalk. She lives with her Aunt, who despises her (as her mother was hanged for killing her husband) and soon enough she is to be married, to be someone else's property. Not wanting that, Amani enters a shooting competition disgused as a boy so she can win money and leave. There she meets Jin, a foreigner who she keeps running into to and who she eventually runs away with, hoping to get to her Aunt in the big city. But of course a there's hijinks along the way and Amani soon learns a lot more about herself. I loved the pace of this book, it was fun and fast. Amani is a great character, full of grit and determination. The world is different to any other YA world I've read which really sets it apart. I can't wait to read the next book when it comes out, definitely recommend! (NetGalley sample)

A Fever of the Blood by Oscar de Muriel

Having read The Strings of Murder last year I couldn't wait to read the follow up book. A Fever of the Blood sees the return of Inspector Frey and Detective McGray and this time it's more personal. A patient at the Edinburgh Asylum for the Insane murders a nurse. But before this happens, he's overheard speaking with a fellow patient, a girl who has been mute for years. This girl is McGray's sister and he is determined to find the murderer to find out what they spoke about. The investigation shows signs of witchcraft and leads the team to the Lancashire witches. This is a fast paced book, I was never bored reading it. I love the way de Muriel writes these books, he builds up signs of the supernatural and magic but there's always an explanation to it all. I was kept guessing the whole way through which was fantastic, there's nothing worse than guessing the answer to the mystery half way through! There's a great atmosphere and as I mentioned above, I love a good Victorian set mystery. A fantastic read! (NetGalley sample)

Glass Sword is a follow up to Red Queen and a pretty solid one at that. A lot of the time, the 2nd book in a YA trilogy is pretty weak but I liked this one. I felt it really helped with the world building, giving us a better sense of the setting of the book. While not perfect (there was one or two things that left me questioning or wondering), it does a lot to set up what will come in the next book. I liked the conflict Mare has when it comes to one of the other characters, she clearly hates him but there's a part of him that she can't let go of either, the part she thought she knew in book one. I feel like I haven't entirely warmed to Mare but that doesn't mean that I can't in book 3 or that I can't enjoy the series otherwise. After all, Mare is a 17 year old girl so maybe it's just that coming through?! It was a fast paced quick read that overall I enjoyed and I look forward to reading the final book once it's released. (NetGalley sample)

Sarah Vowell takes a trip around the United States, to areas that have significance to three of the four successful assassination attempts on US Presidents (Abraham Lincoln, James A. Garfield and William McKinley. Vowell doesn’t talk about Kennedy). She visits the graves, assassination locations and important locations in the lives of not only the presidents but also the assassins. It sounds morbid but it’s not, it’s a glance into hertiage tourism and is fascinating at times. The book is Lincoln heavy, which got a bit annoying to be honest as it started to bore me. Originally Vowell was going to write about all attempted and successful assassination attempts and I think I would have much prefered that. She stuck to the three above because they were all so close together and that several people crop up in all the stories (Lincoln’s son Robert has a connection to all three of the assassinations). I think if I was slightly more informed about American history I would have enjoyed this slightly more. It was interesting and witty and it has made me want to learn more about certain aspects of American history (especially Teddy Roosevelt, who became president after McKinley’s death).

And that’s the first half of the month done. I’ll post the other half in the upcoming day and put the stats in that post.