I can’t believe it’s May already! The year has flown so far. And I’ve already hit my Goodread’s yearly reading target of 30 books. So I’ve increased it to 50 seeing as I seem to be on a roll! I only got 5 books finished this month, though I am 70% through another book that I should have really finished by now. 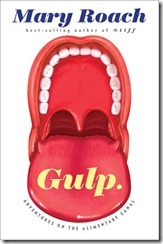 I was very excited to get this book, Mary Roach’s 5th book. I’ve previously read Stiff, Bonk, and Packing for Mars. And this one didn’t disappoint. Mary takes you through science research connected with the alimentary canal, from beginning to end. I really enjoyed it but of course I would, seeing as one of the very first pop science books I ever bought was a Horrible Science book called Disgusting Digestion by Nick Arnold when I was 11! But Gulp brings it to a whole new level, answering questions like how much can our stomachs hold before bursting and what a faecal transplant is.

Sushi For Beginners by Marian Keyes 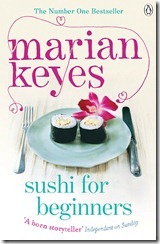 It took me quite a while to finish Gulp, as it does with most non-fiction books. So afterwards I wanted something light to read and when wandering around my small library I came across Sushi For Beginners. Having previously liked Keyes’ other books centring around the Walsh family, I thought I’d give it a try. This book has 3 main characters it revolves around, all living in Dublin. I wasn’t mad about this book, I only really liked one of the main characters but I did want to know what happened and it did keep me interesting. Just not my favourite Keyes book but maybe I’m biased because I love the Walsh family so much! 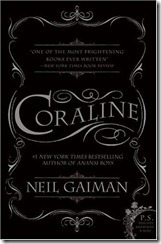 Reading a Neil Gaiman book was on my Reading Resolutions list so I ordered Coraline. I was actually in the middle of another book when this and the next two books arrived from the library but I really wanted to read Coraline straight away. It’s a short book so I finished it pretty quickly but it’s very charming and delightful. I have the film on DVD and love it but I kept that out of mind when reading this so I could imagine how it looked like to me. I’m going to recommend the book to my younger siblings too, I think they might like it. I’m looking forward to reading other Neil Gaiman books now, so any suggestions would be appreciated! 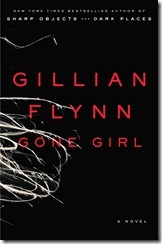 After Coraline, I couldn’t hold off reading this after hearing so much about this. And it had me hooked! I was enjoying it right up to the half way point, where there are two narratives. Then a third narratives started and I was really hooked! It’s well thought out and it’s quite dark, but I enjoyed it. It did leave me with one or two questions at the end and at first I was a bit disappointed with the ending but I got my head around it and I’m not as disappointed. I don’t want to give too much away, the story revolves around Nick, who arrives home to find his wife has disappeared and all signs of a struggle that has been covered up and the evidence that follows all seem to point to him as main suspect. But not everything is as it seems.

The Loveliest Chocolate Shop in Paris by Jenny Colgan 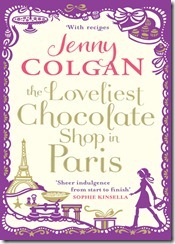 I’ve read two other Jenny Colgan books and enjoyed them so I was looking forward to reading this book. It revolves around Anna, who moved to Paris to work in a chocolate shop. It’s a far cry different to the factory made chocolate Anna used to make back in England, but encouraged by her old French teacher Claire, she moved out to work with master chocolatier Thierry, who is Claire’s old sweetheart. The book tells the story of Anna and how she adapts to gay Paris and also the past story of Claire and Thierry. It’s a sweet book (pun intended!) and I’ll admit I was bawling crying in some parts. I’m such a softie!

Number of books borrowed from the library- 4 (all bar Gulp)

And that’s it for April. I know, you must be all shocked there’s no Joanne Fluke books mentioned! I have a feeling that I’ll end up rereading The Great Gatsby in May, so I can have it read again before going to see the new film, which I’m looking forward to seeing, mainly from a visual point of view as I’m a fan of the Art Deco look.