So yesterday I decided I would start getting through the long list of things I wanted to try and make and set myself the challenge to make at least one a day. And the weather that day influenced my decision on what to begin with. With the wind howling and the rain lashing down, I decided to start with French Onion Soup.

I wasn’t always a fan of onions. Growing up I hated them, usually because they would always be sneakily added to my food, like in burgers. The only way to get me to eat onions as a child was to cover them in batter and deep fry them (in other words, onion rings!). This slowly changed when I went to college and was challenged to try new foods by two of my housemates in second year. And now I can’t get enough of onions!

This new found craving of onions has made me want to make French Onion Soup for months now. Not only was it my first time making the soup, but also the first time tasting the soup. And boy did it satisfy! 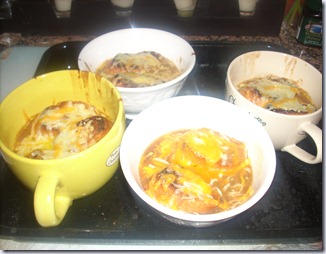 Made in various mugs and bowls as I don’t have the proper serving bowls. And also served without Gruyere cheese (which as far as I understand is sacrilege, so forgive me!). It was so so yummy, I think it’s my new favourite soup! I can’t wait to make it again, next time I will be sure to have Gruyere cheese!

1. Pre-heat oven to 180°C. Peel and chop onions. I chopped mine into chunks instead of strings. Crush and dice garlic

2. Melt butter and oil in large saucepan. Add onions, stir to cover them all in butter and oil. Allow to ‘sweat’ at a low heat, stirring occasionally. ‘Sweating’ is the cooking of vegetables in butter and oil at low heat to extract the juices and flavour without any colour change. Continue to sweat onions for 1-12, until soft but not brown.

3. Caramelise stage: Add garlic (and about 1/2 teaspoon of sugar, to help get brown colour. I forgot!) and continue to cook until onions have caramelised (turned a golden brown) without burning.

4. Stir in flour and cook for 1-2 minutes. Stir in stock, bring to the boil and simmer for 20 minutes.

5. Cut baguette into slices and toast. Put a slice or two of the baguette into a bowl or mug, add some soup, place another slice on top and then cover with grated cheese. Gruyere works best but I used a mixture of mature cheddar and mozzarella. Place into a tray and pop into a pre-heated oven until cheese has begun to melt. Enjoy!

So I’ve kinda been avoiding writing any new blog posts. I don’t know why, I guess the longer and longer I left it, the harder and harder it got to think of something to write about! Hopefully now that I’ve started writing again, it won’t get to that stage again.

To help myself get into the swing of things again, I’ve decided to set myself a challenge: To make at least one new dish a day in the kitchen. I have a big list of dishes I’ve been wanting to try out and this is the perfect excuse! Stay tuned for my first post, French Onion Soup!

Posted by Breige at 8:34 PM No comments: