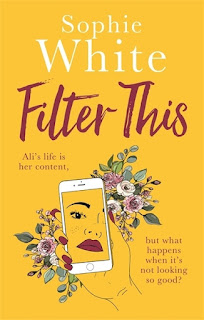 I read Sophie White's first book Recipes for a Nervous Breakdown earlier this year and loved it. It's part memoir, part cook book, you can check out the review here. So when I heard she was writing a novel, I couldn't wait to read. I listed it on my Most Anticipated Book Releases for September to December and was thrilled when I got approved on NetGalley.

Ali Jones is stuck in a job with a boss she hates, her father is ill, her relationship with her mother is strained and the most meaningful relationship she has is with a bottle of wine. She joins Instagram as a way to escape life and channel her creativity and soon becomes hooked, obsessing over the number of followers and likes she gets on her posts. She looks on in envy at some of the big names in the Irish scene, wishing that could be her.

Shelly Devine is THE biggest influencer in Ireland. Beautiful, an actress on a popular soap with a gorgeous successful husband, and cute baby daughter. Not to mention big stylish house and all the brand deals, her life looks complete. But underneath this shiny Instagram portrayal is a different story, with her husband Dan slowly becoming disillusioned with the whole thing and sick of brand Shelly coming before the real Shelly. Can Shelly and her assistant keep the cracks from showing?

When one day Ali leads her followers to believe she's pregnant when she's not, she goes from an up and coming influencer to an overnight success. Ali decides to continue on with the facade but as the time goes on it becomes harder to keep the house of cards from tumbling. Can she succeed in pulling this off?

Filter This is a sharp look at Instagram culture and the influencers behind it. Ali is an anti-heroine, you find yourself rooting for her even though you know what she's doing is wrong! The writing style is very down to earth and very Irish when it comes to dialogue and turns of phrases, something I love seeing in novels. While some of the other influencer characters we see seemed a bit of a stereotype in one sense (peaceful earth mother of a brood of kids who's secretly a nightmare to deal with, a friend who only seems interested in you because your star is rising), they didn't feel forced or farcical, they felt believable. This book made me laugh and cry. Having read Recipes for a Nervous Breakdown, you can really tell that Sophie is writing from the heart and past experiences during some of the sadder scenes, they made me choke up. The humour was right up my alley too, I laughed out loud several times. Looking forward to seeing what happens in book 2! 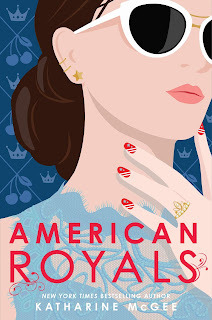 American Royals is the first in a series from Katharine McGee. It's America as we know it, but instead of a President ruling the country, a king does. One in a long line of successors from America's first king George Washington. And for the very first time, thanks to a change in the successor's act, America is to have their first Queen, Princess Beatrice. While still young at 22, she has trained to be a queen since the day she was born. She understands there is Beatrice the person and Beatrice the queen and knows the sacrifices that come with her crown. So when her parents pressure her into dating some eligible bachelors she agrees, even though her heart isn't in it. She's secretly in love with someone else.

Her younger sister Samantha feels like she's nothing, forever to be Beatrice's younger, wilder sister. A spare part, 2nd in line. She envies her sister and the way America adores her. A chance encounter with a handsome stranger at a party has a spring in her step, though trouble is always around the corner with Samantha.

Samantha's twin brother Jeff has split from a 3 year relationship with Daphne and is now falling for Nina, Sam's best friend and daughter to the Minister for Treasury. Nina is hesitant though. Despite knowing the Washingtons since she was 6, she isn't ready for a public relationship and all the pressures that come with it. Daphne is also determined to get back with Jeff but to what ends?

The book was a fun YA book, a little bit too long considering there are multiple points of view (Beatrice, Samantha, Nina and Daphne). It doesn't get confusing but I think having 4 POVs did slow down the pacing at times. It also meant that you'd just be getting into one person's narrative and looking forward to what was happening and then it would change. The tones never changed that much either and I do think it might have benefited from having the POVs from the men in the book. Perhaps that will happen in the next book in the series? Part of me likes the idea of reimagining American history. There were hints to the troubled past America has, such as slavery, and while it wasn't expanded upon, I'm glad it wasn't erased entirely. It does raise a question of the idea of a white monarchy in a country that already had native peoples and the fact that the whole point of the American Revolution was to get rid of a monarchy. That's the part of me that didn't like the reimagining part. However I did manage to cast that aside while reading it, as what the book does well is that it's like a soap opera. I could easily imagine it as a TV show. It was a very entertaining and light read, a fun YA novel that teenagers will enjoy. 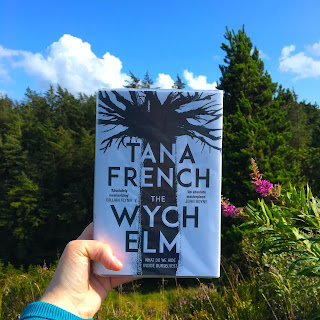 Toby considers himself a fairly lucky guy. He has a job working for an art gallery with a campaign that's going really well, a girlfriend who's mad about him, his own apartment. Then one night he awakes to find the place being burgled by two men, who viciously beat him. As Toby struggles to recover from the attack that almost left him dead, he goes to live at his family's homestead to look after his dying uncle Hugo. The respite is interrupted when a human skull is found in the wych elm tree in the garden. Suddenly Toby and his family find their lives upside down as detectives investigate the mystery behind this skull. With Toby's memory being patchy since the attack and as tensions heighten, Toby is forced to reevaluate his life and if the past is everything he thought it was.

Be forewarned going into this book, it's long and slow moving. Knowing that meant that I could enjoy the book and anticipate what was going to come. It helps that Tana French is a favourite author of mine and that I knew everything would come together nicely. I enjoyed her wording and scene building, she has a lovely way with words. I was hesitant going into this because it isn't part of the Dublin Murder Squad series but honestly it felt like it was, the only difference being the point of view is from a suspect rather than a detective. And with the suspect's memory not being up to scratch, it was a mystery to us as we read it, as he was finding out as it went along what actually happened, so it was like a detective piecing everything together. I wasn't a massive fan of the ending, for something that was so slow it felt a bit rushed or something. That said, despite how slow moving it was at times, every time I wasn't reading it I was dying to pick it up and I read the 500+ pages quickly over the weekend. So that's a good sign! If you've not read Tana French before, I would not recommend this as the first book. But if you have and you're a fan, pick this up!