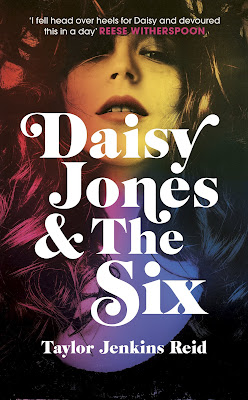 Daisy Jones and The Six tells the history of the rise and fall of legendary 70s rock band. The book's format is very unique, transcribed as oral history from the band's members and other people in their lives such as family, manager and their sound editor to name a few. We hear how The Six formed, Daisy Jones's history, how she came to collaborate with them and how it all came crashing down so suddenly.

This story is the epitome of sex, drugs and rock n roll. The descriptions are so rich and delicious, from the fashion choices (denim on denim for Billy, the long luscious locks for the Daisy along with all her bangles and big hoop earrings) to the simmering and sometimes explosive tensions between band members. There's one scene where they are shooting their album cover and it's clear that the photographer is focusing on Billy and Daisy and while the other band members hate it, there's nothing they can do about it. It reminded me of the Don't Speak by No Doubt music video. Though let's be real, while reading this there's only one band on your mind, Fleetwood Mac. It's so evocative of their story, Jenkins Reid takes elements of it and makes it her own. I liked that there were layers in the band's story. Going in I thought it might be one dimensional but so much is touched on, who despised who, those that had more of a love/hate relationship, who was there for the good times, who loved who. You go in thinking that the downfall of the group is going to be one thing but see that it's a combination of different personal relationships as well as individual demon's that causes the implosion.

The writing style is done where the people are interviewed individually and then the story is told in chronological order. I liked the nuances where one person recounted an event one way only for the next line to be a different character relating it a different way. The only problem I had with this  format is that it would have been cool to have the individual interviews but also have sections where two or more people were interviewed together so you could see more of a discussion between them about the events. It would have added a nice extra layer, to see the characters interact with each other some bit rather than to just hear how they had previously interacted. I also thought the climax would have a much bigger impact, possibly because I was expecting something like The Seven Husband's of Evelyn Hugo so I was a bit disappointed by that. However this book still has me super excited about a number of things

1) the audio book has multiple narrators, one for each character, which I think sounds like such a fun way to consume this book, like an audio documentary. I might listen to it again once it's released.

4) There's a Spotify playlist to go along with this book which I just love the idea of. On the Come Up by Angie Thomas has a playlist too and I think these touches for books, especially books with music at the centre of the story, is such a cool

You know you've read a good historical fiction book when you want to know everything about what you've just read. Reading this book will make you want Daisy Jones and the Six to be real. You'll want to know everything about them. Unfortunately as they're not real you'll have to do what I'm doing now, Googling 60s Sunset Strip, 70s fashion, delving into the history of Fleetwood Mac while listening to the Rumours album, waiting for the TV show to be released.
Posted by Breige at 8:00 AM No comments:

After the incredible 3 month long January and 4 hour feeling Februrary, we're finally in March. And I love to read Irish authors in March. Why this month? Probably because of St. Patrick's Day to be honest. And I like that we're now into the 3rd month of the year and it's a good time to have a themed or set reading month. With all the excitement of new releases and reading challenges with the new year starting, there's no way I'd be able to focus on a themed month in January or February.

I started reading only Irish authors back in March 2014 and since then I pretty much only read Irish authors. Every now and again towards the end of the month I might pick up something else and I like not being too tied down to the theme. I've mainly tried to stick to people born in Ireland but I think after this year I'll start branching out to people of Irish descent too. I have some books I own that I want to try read, I might not get around to all of them but thought I'd put together a TBR list for this month for some of the choices I'll probably pick up. Let's start with the physical books. 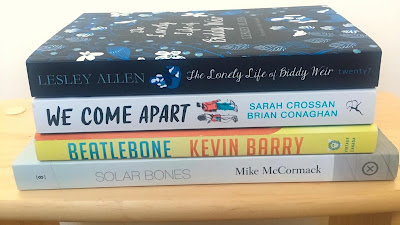 I own a nice stack of books by Irish authors but these are the ones I think I'll try focus on this month.

1. The Lonely Life of Biddy Weir by Lesley Allen. I got this free when I went to the Irish Book Awards in 2016. I don't know much about it, the book starts off with the main character Biddy ringing in to a TV show on the subject of bullying and she tells her story.

2. We Come Apart by Sarah Crossan and Brian Conaghan. I couldn't tell you what this book is about without having to look it up first. To be honest I don't even know if I looked at what it was about when I bought it! I probably picked it up as I've enjoyed Sarah Crossan's other books One and Moonrise. That and it was a good price.

3. Beatlebone by Kevin Barry. I've read Dark Lies the Island the author, a collection of short stories that were haunting at times. Beatlebone is a fictionalised account set in 1978 of John Lennon going to the island he bought off west coast of Ireland.

4. Solar Bones by Mike McCormack. Most of the people I follow on Goodreads have said not to read the blurb when it comes to this book which is what I've done. I bought this in 2017 and showed it in a haul post (which also included The Lonely Life of Biddy Weir). I've read half of those books, proving I'm rubbish when it comes to reading the books I buy.

Now on to the ebooks and audiobooks

1. Things in Jars by Jess Kidd. I featured this in my most anticipated reads for 2019 and I'm happy to say I have an ARC and I've already started it. Set in Victorian London with a female detective investigating a missing child, I'm really enjoying it so far.

2. The Wych Elm by Tana French. Another book featured in my most anticipated post, I love Tana French and I'm hoping her first book not set in the Dublin Murder Squad world doesn't disappoint.

3. When All is Said by Anne Griffin. This has been on my radar for the last week or so, mainly because it keeps popping up on the Rick O' Shea Book Club. 84 year old Maurice sits at a hotel bar and orders 5 different drinks, toasting a different person who impacted and shaped his life. In doing so we hear his life story. It's intrigued me so I requested a copy on NetGalley.

4. Conversations with Friends by Sally Rooney. If you haven't heard Sally Rooney's name, then you probably live under a rock. I got this as an audio book during one of Audible's 2 for 1 sales.

There's a few other books I might pick up over the month. I'm mainly hoping I can get an early copy of Cruel Acts by Jane Casey as I've read the first chapter and I loved it. I have no non-fiction here so I might need to find one to break the month up too.

If you've read any of these books let me know, it might help me pick it up faster!

Posted by Breige at 6:38 PM No comments: