Ireland: Should I stay or should I go?

Australia. There’s probably more Irish there at the moment than Australians. It seems to be the place for Irish people to emigrate to and yet, despite the fact that several of my friends are over there right now, I have zero interest. Sure, I would like to visit Australia at some stage, but I don’t want to move there. Though when I say this to people, even close friends, they look at me like I have two heads or something. When my boyfriend returned after spending 4 months there, one of the most common questions he got was ‘Would you go back?’. And most times he answers ‘No, not without Breige’. Cue people turning to me with an inquisitive look on their face. Which quickly turned to shock when I said I had no intention of heading out there anytime soon.

Why is this so shocking? Why is it such a bad thing to want to be close to home? Don’t get me wrong, I love to travel and can’t wait until I can jet off somewhere again. I’m not one of those people who never wants to leave their county, let alone the country. But Australia isn’t a priority right now. If someone handed me a wad of money and said ‘Here, go travel!’. Europe would be first on my list. Which apparently is ‘boring’ as it’s on the doorstep and I can go there anytime. But it’s what I want! And people seem to sneer at this for some reason.

I don’t want to leave Ireland like my grandparents had to. I’ve lived here most of my life, it’s my home and I’m damn proud of it. Especially after the international spotlight has shone so brightly on us recently, I can’t tell you how happy I was that the Queen of England and Barack Obama’s visits went smoothly. The atmosphere here after that was amazing, a mix of hope, pride and happiness. There was no talk of IMFs, recessions or bankers, just the sheer pride of being Irish.

As much as I want to stay home and help rebuild the economy, it’s looking worse as the days go by. The timing for my college graduating year couldn’t have been worse. We went into college during a boom, when jobs were plentiful. One of the first things that was said to us in college was that everyone in the course who had graduated that year either went into a job or into further studies. 4 years later and it’s a different story. Even after a year, there’s still so many of us unemployed. It is disheartening and at the same time frustrating, because my generation didn’t cause this recession and yet we’re suffering for it. Suffering for something we had no control over.

It’s no wonder that so many people I know are now living abroad. And it’s in my mind more and more everyday. Should I stay or should I go? By the end of this year, unless things pick up, I might just have to go. Where to? I don’t really know. London maybe, or perhaps Canada. Australia? I might not want to go there, but the way things are, I might not have a choice.

I always find that I buy large tubs of yoghurt, forget about them until they’re just going out of date and then think ‘How the hell am I going to use these up?!’. I usually turn to my trusty Yoghurt Cake recipe (which I shall post another time), but the other week I was bored of this and off I went to Google, to see what other ways yoghurt could be used up. And yoghurt pancakes was the first thing that popped up. Now when I make pancakes, it’s usually crepe style ones, but recently I’ve been dying to try out American style thick fluffy pancakes, thanks to AtebyAte and Babaduck. So this was the perfect excuse! 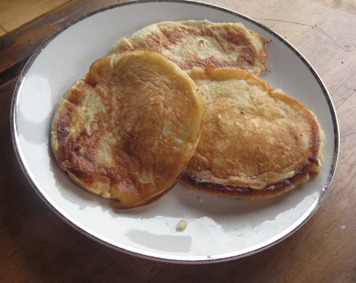 2. Stir the wet ingredients into the dry ingredients until it is completely combined with no lumps.

3. Heat the frying pan with some oil. Pour batter in using 1/4 cup.

4. When bubble form on the top, flip over and cook the other side until golden brown.

You can also sprinkle extra ingredients on top of the pancake at step 3, like fruits or chocolate chips. I served mine with golden syrup! Definitely a wonderful weekend treat! 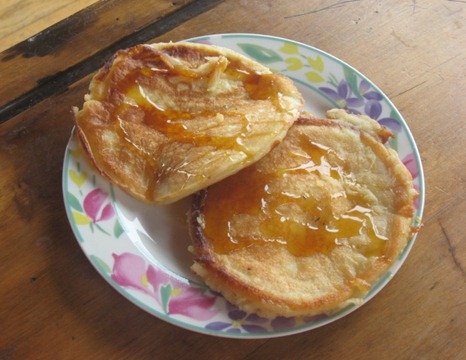 What recipes do you like to use when there’s yoghurt to be used up? I’d love to hear them in the comments below. Don’t be shy!

Put simply, May wasn’t my month. It started off well, with my boyfriend’s return from Oz but quickly went downhill. I was involved in an accident. Something I luckily managed to walk out of pretty much unharmed. It could have been a hell of a lot worse though. So it’s because of that I haven’t been inspired to post anything here. I have a list of things as long as my arm to write about but zero motivation for the moment.

Besides the above, here are some other things I’ve been up!

-Finishing up work, just a few more weeks left before it’s all over. I really need to start thinking about my next move!

-Reading. Lots of reading. Just finished the new book from Dave Gorman called ‘Dave Gorman vs. The Rest  of the World’. Makes me want to play Connect 4 or something.

-Using things up. It’s something I meant to write about before but never got around to it. I don’t have any particular loyalty to beauty brands, when something new comes out I want to try it. That leaves me with loads of unfinished bottles of shampoo and shower gel. It all gets used up in the end but it sure takes up a lot of room. For the month of June I’m going to try use up as much odds and ends as I can. And also not buy anything new unless it’s all gone and I need it. So far so good!

That’s about it really. Boring right? May turned me into a hermit. I have lots of other stuff to write up, I’m hoping this will help get the creative juices flowing again. I also have so many blogs to catch up on too! I’ll hopefully get around to that by the end of the week.