Hello! Last week I won the chance to go to the Bord Gáis Energy Irish Book Awards and had a fantastic time. The awards were on at the DoubleTree Hilton Hotel in Dublin and I was in the green room along with Chloe from Nurse Fancy Pants and the other competition winners. The awards were hosted in one hotel room, with all nominees, agents and industry people and then the winners were interviewed in the green room by Evelyn O’Rourke. We were really well looked after, we got a lovely buffet dinner, free drinks and a goodie bag too. 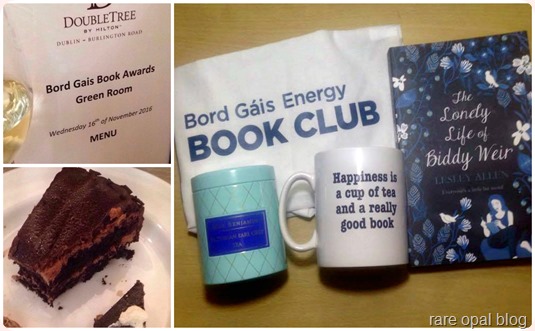 I have read three of the winning books: Lying in Wait by Liz Nugent which won The Ryan Tubridy Show Listeners’ Choice Award, The Trespasser by Tana French which won the Crime Fiction Book of the Year and Making It Up As I Go Along by Marian Keyes which won Popular Non-Fiction Book of the Year (I’ve also read two other nominated books: Flawed by Cecelia Ahern and All We Shall Know by Donal Ryan). Hearing the winning authors talk about their books was fantastic, I’ve added several more to my TBR like Holding by Graham Norton and The Knights of the Borrowed Dark by Dave Rudden (which I actually own a copy of thanks to the Penguin Ireland books I won earlier this year). After all the interviews were done we had a chance to mingle with everyone. Chloe and I managed to get briefly chat to Paul O’Connell and Graham Norton before getting pictures with them (they were probably the most in demand that night and also so lovely and patient!). And I also got to talk to Tana French who was just so nice, The Trespasser has genuinely been one of my favourite books this year and it was great to meet one of my favourite authors.

I had a such a lovely evening, it was great to finally meet Chloe and we only stopped talking to each other when we were busy drinking wine! Thanks Bord Gáis Energy for the chance to go, I had a fantastic time!

Posted by Breige at 5:45 PM No comments:

Hello! This post is late because unfortunately I got sick last week and while I tried to get blog posts done I just didn’t have the energy. October was a fantastic month, it’s always been a great month for me because of my birthday and Halloween. And this month was just as wonderful for me. 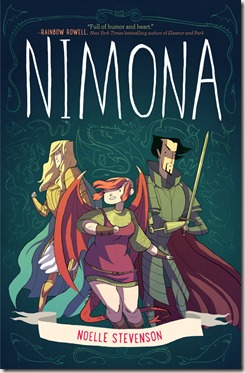 I decided to pick up Nimona because I was enjoying Stevenson’s Lumberjanes series. Nimona is a young shapeshifter who teams up with the villian Lord Blackheart. Even though Lord Blackheart is the villian, he still sticks to strict moral code, something Nimona is not intersted in. She just wants to wreak havoc and have fun doing it! With fun, dragons and science, will Lord Blackheart and Nimona prove that Sir Goldenloin and the Institute of Law Enforcement and Heroics aren’t all that they’ve been hyped up to be? Or will Nimona’s mysterious past and hot head ruin everything? This was lots of fun to read, Nimona is a flawed but kickass character and I hope to see more of her in the future. 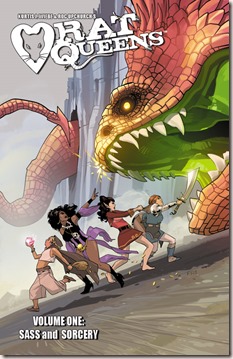 At the end of last year I got this on NetGalley but for some reason my download wouldn’t work so I couldn’t read it. I eventually got it from the library though. As the back of the book puts it:

They’re a pack of booze guzzling, death dealing battle maidens-for-hire and they’re in the business of killing all the gods’ creatures for profit. Meet Hannah the Rockabilly Elven Mage, Violet the Hipster Dwarven Fighter, Dee the Atheist Human Cleric and Betty the Hippy Smidgen Thief

These ladies kick ass and aren’t afraid to fight, swear or drink. It’s really humorous and we get to see glimpses of some of the queens’ backstories. Violet is probably my favourite but they’re all fun! If you like RPG then I think you’ll like this too. 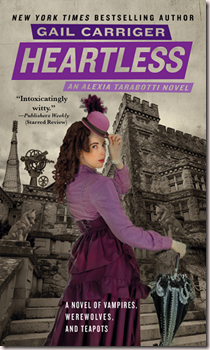 Book 4 of the Parasol Protectorate series featuring Alexia Tarrabotti (and the first one I had to physically read as I had the audiobooks for the previous 3). I love this series, I have one book left and I’m half saving it as I don’t want the series to end. But there is the Custard Protocol series to start right after! I won’t say anything about this plot but if you like Victorian ladies, vampires and werewolves and sassy independent ladies then this might be a series for you! 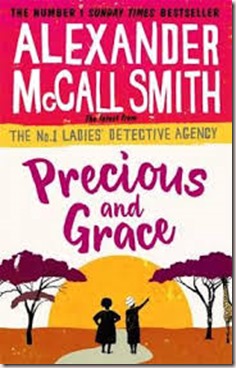 Book 17 in the No. 1 Ladies Detective Agency, a series I’ve read for years now. It’s set in Botswana and while there are cases to be solved, this is defintely more in the cosy mystery side of things than hard hitting thrillers. While I do enjoy the series and the setting in Botswana, I am tiring a small bit of it. Grace can be quite rude and horrible and times and I wish Precious would tell her to cop on! But she’s too nice and understanding for that. I’m not sure if I will continue with this series, it’s gotten to the point where I get a bit angry at Grace and that I KNOW I’ll be angry with her at some stage in the book, even if she redeems herself. I’ll see in the future if I’ll pick them up. 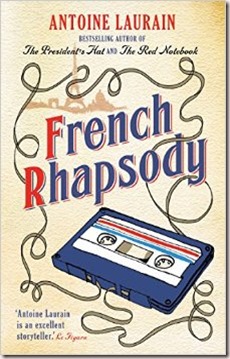 Alain is a middle aged GP in Paris who lives a pretty mundane life. Until one day he receives a letter that's thirty-three years late being delivered (due to Paris postal system losing it). The letter is from a record company offering The Holograms, Alain's band in the early 80s, a record deal. Alain no longer has a copy of their recording so he tries to contact some of the members of the band in hope that they'll still have a copy. We get to see all the other members of the band and paths their lives took after the band disbanded: an economist, an extreme right-wing politician, an antiques dealer, a sculpture artist and a hotel owner.

I read The President's Hat earlier this year and really enjoyed it. It's why I decided to read this book, which does have a similar wit and whim. I loved how the characters’ lives crossed paths and intertwined in The President's Hat and we get that again in French Rhapsody. We see how the lives of the characters have crossed each other's over the years since the band split. It was interesting to see the changes to all the characters and they were a mixed lot! While the book opens with Alain, he's clearly not the centre of this book. JBM, the economist, is the main focus of this book. I suppose Alain is the catalyst for the story though, gets the whole ball rolling. While I didn't dislike this book, I did find it lacking slightly. The charm and sweetness in The President's Hat isn't to be found here and half way through this book I did start feeling a bit blah about the story. However it picked up again and definitely redeemed itself. It was a quick read too and I think I'll pick up The Red Notebook in the future. [NetGalley]

The Hanging Tree by Ben Aaronovitch 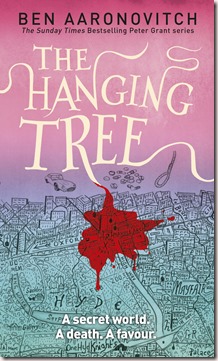 I have been eagerly waiting this book for so long! The Hanging Tree is book 6 in the Rivers of London series. I read books 1-4 November 2013, book 5 (Foxglove Summer) in November 2014 and I’ve wanted this book ever since then.

Rivers of London series is an urban fantasy set in London. It follows PC Peter Grant, who is doing a night shift at the scene of a vicious beheading when he speaks to the only witness to the crime- a ghost. From there Grant is introduced to DCI Nightingale and he discovers there’s a whole magical division to the police force. The series has a whole slew of different characters such as River Goddesses, demigods and jazz vampires. There’s also the mysterious Faceless man, a rogue magician who taunts Peter and Nightingale.

Book 4 left some things unanswered and they remained unanswered in book 5 which made things a bit frustrating! I do think this book answers some, if not most, of the questions but I do think I could have done with rereading some things to refresh my memory. I had forgotten so much and it wasn’t until I read something in this book that my memory was refreshed and I remembered the previous books. I really enjoyed this, I enjoyed returning to Peter and his world. It was fun and full of action and I’m already looking forward to the next one! [NetGalley] 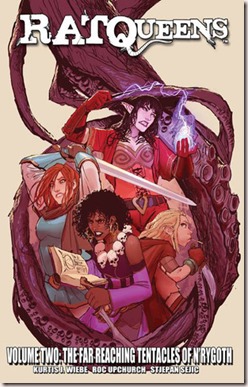 Volume 2 in the Rat Queen series, more drinking, more fighting, more of these ladies kicking ass! This time we find out more about Dee, the cleric, and her past. I’m enjoying this series so far and hope to continue it in the future. 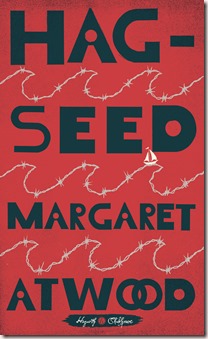 Hag-Seed is Margaret Atwood’s take on Shakespeare’s The Tempest, as part of the Hogarth Shakespeare series. I did a full review earlier last month which you can check out here. It’s by far my favourite of the Hogarth Shakespeare series (I only just liked Vinegar Girl by Anne Tyler and I tried to read Shylock is My Name by Howard Jacobson but really didn’t get into it). I liked this, I found it witty and clever and I really liked the setting. [Blogging For Books]

All We Shall Know by Donal Ryan 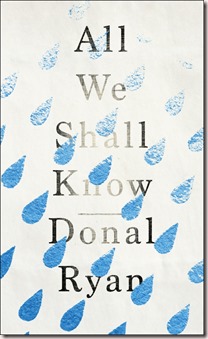 This was one of the October Book of the Month for the Rick O’Shea bookclub, which already has a lot of Donal Ryan fans. Despite hearing a lot about him, this is the first book of his that I read. Melody Shee is tutoring 17 year old Martin Toppy, son of a famous Traveller and she falls pregnant with his baby. She tells her husband that she cheated on him with someone from the internet. He takes the news badly and leaves her all alone. She doesn’t want to tell her father as he is a good man and doesn’t want to break his heart. Melody goes to visit Martin Toppy one day, only to find his family has moved on. Instead Melody starts an unlikely friendship with young Traveller Mary Crothery, who has her own problems.

This book was beautifully written, Ryan just nails Melody’s character so well. She’s got a wicked bad temper, in a toxic marriage and isn’t that nice a person most the time. But the way Ryan writes her means at times we do soften towards her and hope that she can work through her demons and things in past. He writes about ordinary things but does it with such poignancy. At one stage he describes Melody’s father and it just brought tears to my eyes! This is probably one of my favourites from this year and look forward to picking up more of Donal Ryan’s work in the future. [NetGalley]

Number of eBooks- 5 (Heartless, French Rhapsody, The Hanging Tree, Hag-Seed and All We Shall Know)