Gold Leaf topcoats are all the rage at the moment! It kick started with OPIs 18k Gold Leaf topcoat, which they brought out as part of their Bond Collection, but seeing as it’s 30 odd Euro and I’d barely even pay that much on a dress let alone nail varnish, I decided I’d have to give this trend a skip. Until Catrice announced they were bringing out their own version and I thought ‘I bloody better get my hands on this!’.

So when I saw it in the shops I leapt at the chance at buying it. It looked so pretty in the bottle. But even then I could see it wasn’t very ‘gold leafy’. And this was only confirmed once I’d applied it on my fingers.

Don’t get me wrong, it’s a lovely topcoat but it’s not gold leaf. Which is a shame. All the same, it’s beautiful and there’s a lovely sparkle off it! I said I’d test it out on both a dark base and a lighter base (that’s dedication for you!).

For the dark, I chose Nails Inc. in Motcomb St, a beautiful dark inky navy. 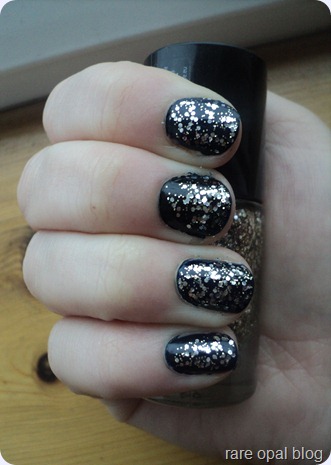 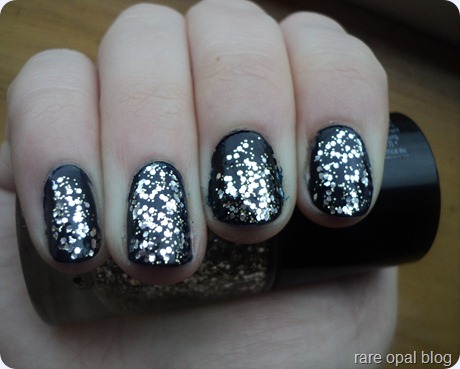 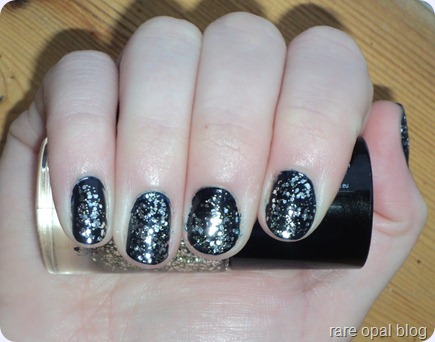 For the lighter shade, a chose by Rimmel Lycra Pro Professional in Peppermint, a pastel minty green. 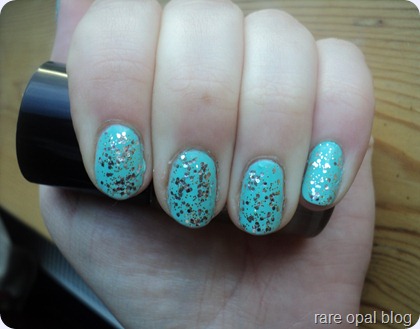 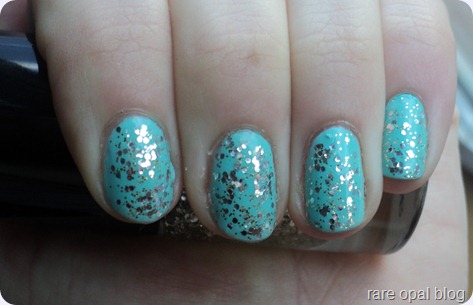 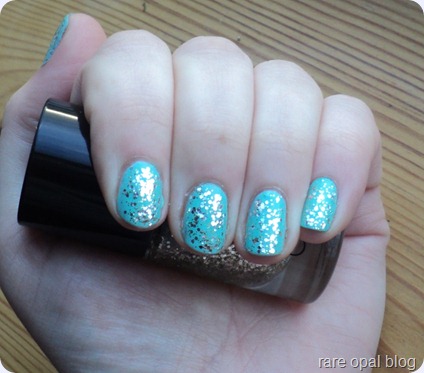 Overall, I preferred it with the dark base, I just think it sparkled a lot more (my boyfriend was entranced by them!). It’s certainly different than other sparkly topcoats but if it’s real gold leaf you’re looking for, then you’ll have to look elsewhere!

My first China Glaze product! Not for want of trying (long story that basically ended in me cancelling my order). Anyway, the minute I saw this I knew I wanted it! It was out of stock but I waited a few weeks and when it was restocked I bought it straight away! It’s a Trap-eze! is from the Cirque du Soleil collection. It’s very unusual because of the milky white base and it doesn’t seem very glittery in the traditional sense, probably because the base subdues it a bit. I haven’t tried layering it yet but I say it can be done by applying thin coats. 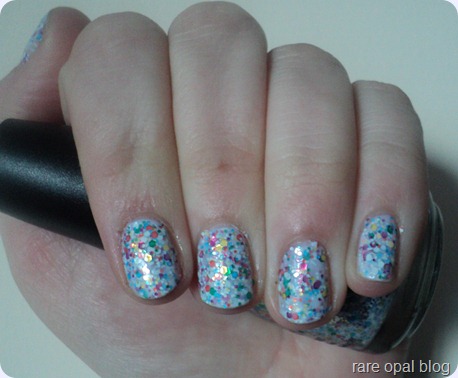 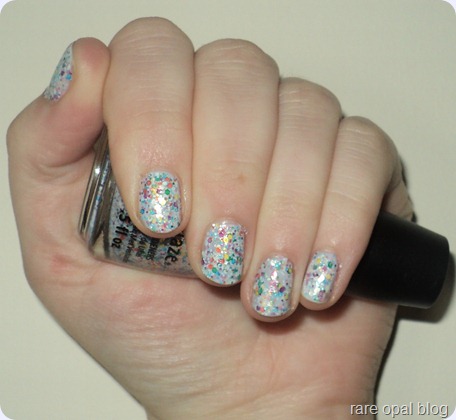 I do think it’s different than other multi coloured glitters out there, I’m not sure if I love it as much as I did when I first saw it though. I think I’ll know better when I get around to layering it!

So this is the last post for my favourite songs, the first one can be found here. 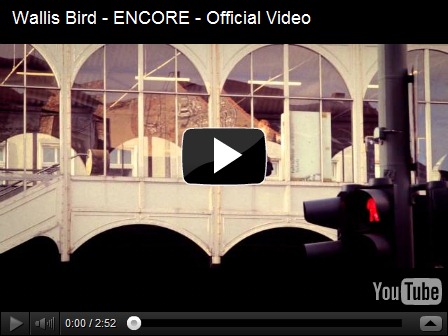 I love Encore from Wallis Bird. It’s so so catchy, I love the lyrics and I find myself singing along to the chorus every time I hear the song. It’s so positive and upbeat. I also loved Heartbeat City from the same album. 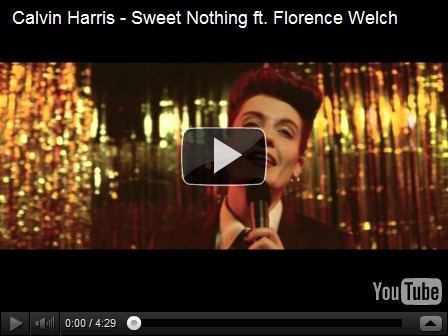 I’m not a huge fan of Florence and the Machine (I just never got Florence fever like everyone else) but paired with Calvin Harris in this song, I love it. Though more because I sing the lyrics ‘You’re giving me such sweet muffins’! 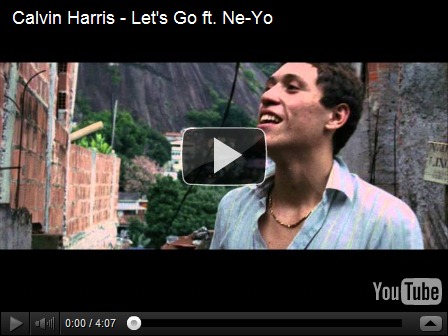 Another Calvin Harris, this time with Ne-Yo. Instant dancing! 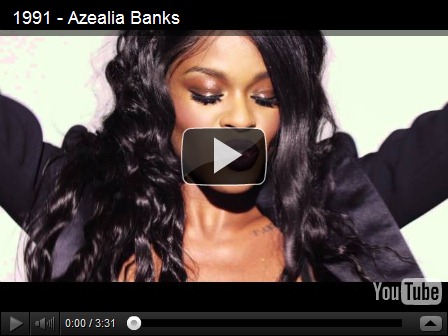 Second Azealia Banks songs, I love the 90s look for the video and trying to pick out all the references! And the song has me bopping along. 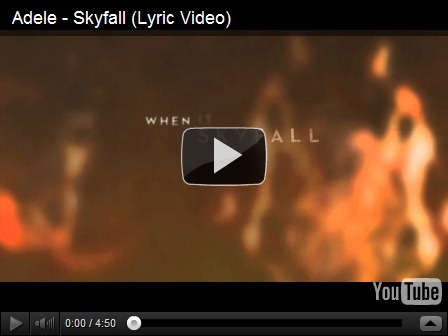 Loved the Skyfall film and the theme song by Adele is just perfect for it. I really hope she gets some recognition at the Oscars next month! 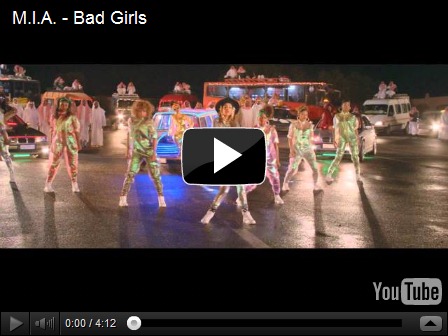 This is the last song. I heard this earlier on in the year but had forgotten about it until I heard it again last week and I’ve been listening to it ever since. There’s a behind the scenes making of video here.

And that’s it! I probably liked a few other songs but nothing that stands out. I didn’t like ‘Somebody That I Used to Know’ or ‘We Are Young’, I found ‘Starships’ catchy but I don’t think I’ve listened to it at all outside of a club! What were your favourite songs?

Email ThisBlogThis!Share to TwitterShare to FacebookShare to Pinterest
Labels: 2012, music

Every year I set a reading goal, usually with an aim of reading a certain amount of books. This year I decided to do things a little different and dedicate a whole blog post to it.

1. Read To Kill A Mockingbird

I know, it’s shameful I’ve never read it. It wasn’t on my list for secondary school so I never was interested in it. My brother and sister give out to me over how I haven’t yet read it. I even own the book! Then again, owning something doesn’t mean I’ll get around any time soon to actually reading it!

The main reason I want to do this is because of the film that’s due to come out!

Yes, I’ve never ever read a Stephen King novel before. This shocked my friend Krissy so much that she went ahead and bought me Dolores Claiborne on the spot! I might read Carrie as well, seeing as there is a new Carrie film coming out.

I loved the Hitchcock film so I want to read the book too.

A toughie I think but if my Yank friend Keith can read them then so can I!

6. Read Postcards From the Edge

I don’t know how many times I have tried to read this and stopped. And not because I didn’t like it but just because I got side tracked or began to read another book and forgot about it. I am determined to finish it!

I’ve never read any Marian Keyes, except Saved By Cake, but I find her Twitters funny so I wanted to put her on the list. I will probably try Watermelon, as if I like it I got Rachel’s Holiday free on iTunes the other day and will continue on the series then.

I think I tried to read this, but it could have been another Donna Tartt book that belonged to my aunt. Regardless I still want to give it a try!

I’ve never read any Neil Gaiman either so I think Coraline might be a good place for me start as I adore the film of it (not sure if that’s a good or bad reason for picking it!).

Another one that pops up often on ‘To Read’ lists, it was a toss up on this or Lolita and I based it on what my friends on Goodreads had read and rated and this won out. I do like The Virgin Suicides as well so that was another reason I chose this one.

11. Read one book on the first page of Goodreads Popular Classic Novel books

The link is here, I want to read one of the books or authors that I have not listed above. I own several of these actually (mainly Austen and Dickens) and as I’m not sure if the books move places due to rankings or ratings, I’ll pick the book from the front page the day I decide to start it.

Again, I’ve never read Pratchett, I’ve always been hesitant that he won’t be my cup of tea but I want to stop literally judging a book by it’s cover and give one a go.

So, that’s it, 12 challenges, roughly one a month. I could have gone on but I thought I’d better stop! And now that I’ve got as far as here I think I will have a number aim as well, I’ll stick to 30 this year!

If you have any suggestions for me or just want to give out that I haven’t read XYZ, then feel free to leave a comment!

It’s the time of the year where I post my favourite songs from the previous year! I only want to do two posts this year instead of three so I had to make sure there were only 12 songs max. Once I had put my list together I noticed it was all female except for 2 songs! Kinda cool really. 2012 was the year of Azealia Banks for me! I’ve properly listened to her more than anyone else this year. Though I decided to limit myself to just two of her songs, Liquorice being the first of them. I love the beat to this, it’s so catchy (originally Pineapple Crush by Lone). 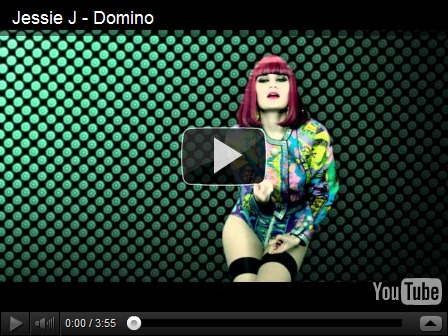 If you asked my boyfriend what was my favourite song of the year he would probably say Domino by Jessie J. Probably because he caught me singing it so much! I first heard it in the car coming back from Dublin with my brother, he already knew the song but thought it was Katy Perry! I’m not sure if I like the original version or Jessie’s Live Lounge cover better. 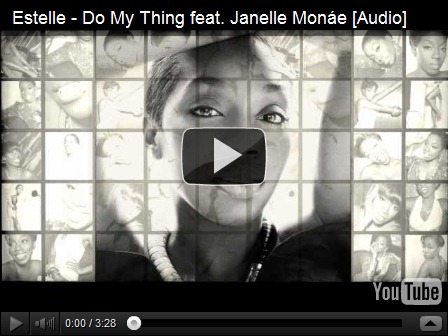 Do My Thing contains two of my favourite singers, Estelle and Janelle Monae. I love the positive message in it and it makes me want to dance every time I hear it. 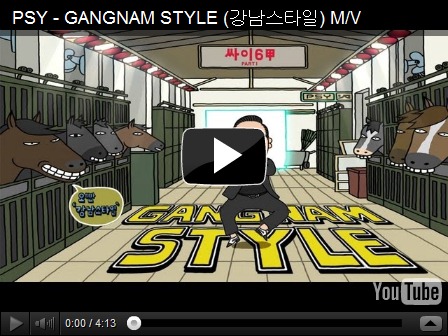 I couldn’t leave Gangnam Style out, especially since I had a whole blog post dedicated to it! 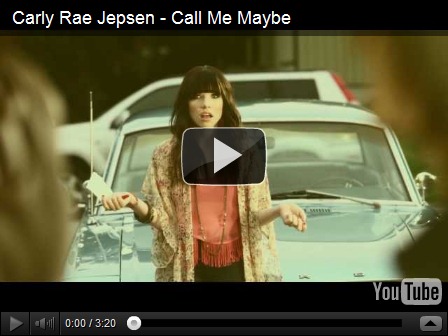 This is an odd choice because I didn’t really listen to it myself a lot. In fact, according to my iTunes, I’ve only listened to it 3 times and I say that was during one or two parties I had. I’m adding Call Me Maybe more for the fun I had dancing to it on nights outs! (along with Gangnam Style, though I actually listen to that at home). 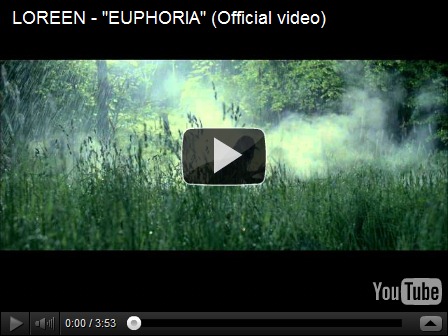 Last one for this post, Euphoria by Loreen, this year’s Eurovision winner. I didn’t really like it at first but boy did it grow on me. It’s a great one to dance to and to belt along to.
Posted by Breige at 8:11 PM No comments: