So it’s been a while since I did a post showing what books I bought. The last one was back in January, so there’s quite a few books to show. So let’s get cracking! 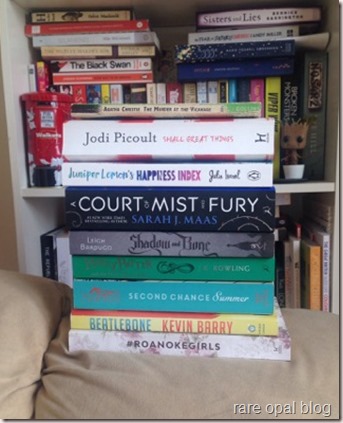 From the top down

-The Murder at the Vicarage by Agatha Christie. I bought this in Charlie Byrne’s in Galway

-Small Great Things by Jodi Picoult. It’s actually my sister’s book but it’ll be mine until I read it!

-Juniper Lemon’s Happiness Index by Julia Israel. I kept hearing about this book so when it was announced as the offical book for the BookTubeAThon I decided to pick it up

-A Court of Mist and Fury by Sarah J Maas. I had owned the first book in this series, A Court of Thorns and Roses, as an ebook for ages and when I finally got around to reading it in July, I had to go buy this one so I could keep reading!

-Shadow and Bone by Leigh Bardugo. I got this in the little free books box at one of the local libraries.

-Harry Potter and the Philopher’s Stone by J.K. Rowling. This is the 20th anniversary Slytherin paperback edition, HAD to have it!

-Beatlebone by Kevin Barry. This was on offer at Eason’s for a few euro.

-The Roanoke Girls by Amy Engel. A friend gave me this ARC edition of the book 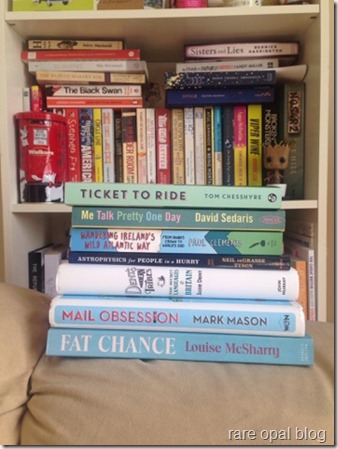 From top to bottom

-Ticket to Ride by Tom Chesshyre. Bought this in Manchester Airport after a hen weekend, it’s a book about different train journeys

-Me Talk Pretty One Day by David Sedaris. I’ve only read one Sedaris book so when I saw this in a charity shop I thought I’d pick it up

-Astrophysics for People in a Hurry by Neil DeGrase Tyson. A Goodreads Giveaway win!

-Dent’s Modern Tribes by Susie Dent. A book about the unique lingo used by different professionals.

-Fat Chance by Louise McSharry. The lovely Chloe from NurseFancyPants gave me this book!

-Eat Sweat Play by Anna Kessel. I read this earlier this year after borrowing it from the library, so when it was on offer I snapped it up as it something I see myself rereading and going back to

-A Natural History of Dragons by Marie Brennan. I saw Books and Pieces talk about this and when it was on offer I decided to get it and give it a chance.

-Caraval by Stephanie Garber. I’ve seen a lot of hype about this, I’m still not sure I want to read it but it was on offer so I decided to get it

-You Had Me At Hello by Mhairi McFarlane

-To All the Boys I’ve Loved Before by Jenny Han

-Lie with Me by Sabine Durrant

-Just Haven’t Met You Yet by Cate Woods

All these were free books on Amazon or iBooks. There were other free ones that I didn’t get, I picked these as I’ve either read the author before or heard good things.

-Lady Midnight by Cassandra Clare. This was a free download on Audible

-Prudence and Imprudence by Gail Carriger. Books 1 and 2 in The Custard Protocol. I liked listening to the Parasol Protectorate so much that I decided to get these as audiobooks as well

-Hidden Figures by Margot Lee Shetterly. I’ve yet to see the film but I thought I might listen to the book

-Shrill by Lindy West. I have a feeling this one will crack me up!

-The Professor and the Madman by Simon Winchester

-The Butterly Effect by Jon Ronson. Free Audible short and I do love Jon Ronson

Phew! Quite a list, I need to keep on top of things and not wait 9 months or so to do a book purchases post. If you’ve read any of these I’d love to know