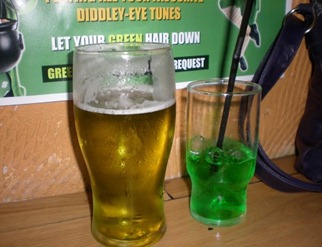 Happy St. Patrick’s Day everyone! The day that everyone and their dog is Irish, not wearing green will get you pinched and green beer is a must (or 7-Up as I had one year during my exams, as pictured above on the right). Paddy’s Day is a lot more than just Paddywhackery, both religiously and culturally, at least here in Ireland. It celebrates our patron saint and how he helped spread Christianity. I think it’s far more important though to celebrate our culture and heritage today. It’s never been about drink to me (I’ve never had any alcohol on Paddy’s Day! And today won’t be any different I suspect). It’s been about spending the day with my family, going to the local parade (which is more tractor and trailers than big fancy floats!). It’s about being proud to be who are and how far we’ve come as a small country. Small but mighty! Times have been tough here lately, there’s no debating that. But there is still loads to be proud about. So I got thinking about what I love about being Irish!

1. The accents. For a country this small we sure have a wide and diverse array of accents!

2. Hurling. The clash of the ash! How unique is it?! Lightening fast and often bordering on vicious, a good game is gripping and thrilling. Of course, I love it mostly when fights break out on the pitch!

3. Speaking of hurling, do you know how to spot an Irish person abroad? Look for their GAA jersey! I was shocked the first time I saw some guys wearing them on the beach in Spain!

4. Our culinary ‘delights’. Mainly Cheese and Onion Tayto, hang sangwiches, brown bread, Irish fry (or breakfast roll!), TK Red Lemonade and cup of tae (which I still haven’t tried. Yes, I know, I should really hand in my passport). 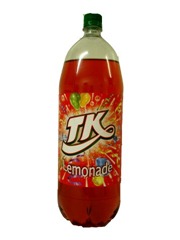 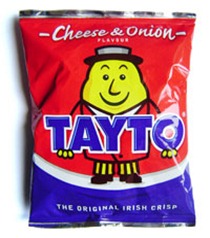 5. The comedy. The hilarious Dara O Briain (come back to us!), Colin Murphy, Des Bishop, Tommy Tiernan, Andrew Maxwell, I could go on and on. You may not like one or two of them but there is someone for everyone’s comedy tastes! And Father Ted. Need I say more?! I also love Graham Linehan’s The IT Crowd, starring Chris O Dowd (and I suppose I should mention Black Books with Dylan Moran!). 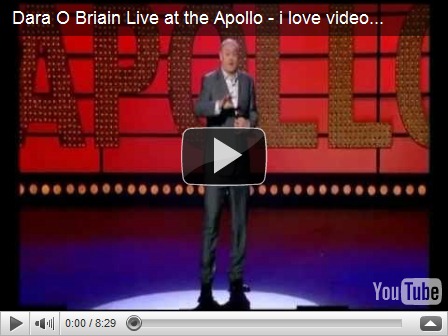 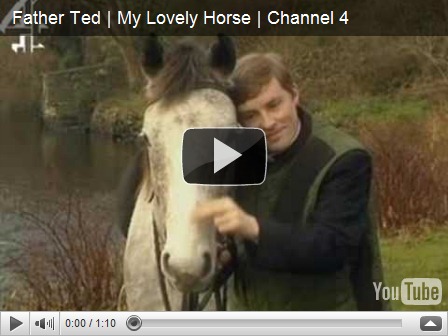 6. The music. I could go on about the usual U2, The Corrs, The Dubliners etc but there’s loads more talent out there (not that the ones I mentioned aren’t talented!). My favourite Irish artist at the moment is Imelda May, I love her rockabilly vibe. And The Rubberbandits, who are just so funny. Also, how about pieces of music that are so Irish but aren’t really songs. Like the tune to The Sunday Game?! 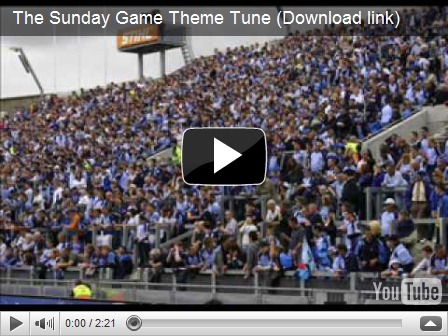 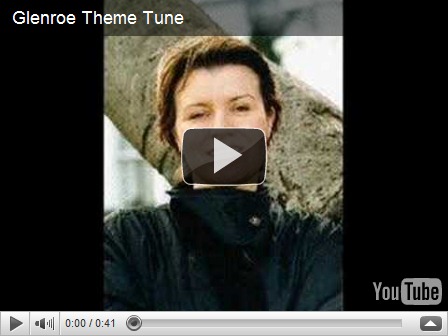 I remember Irish dancing around the sitting room Sunday nights to that! You always knew it was time for bed once it ended. The less said about Crystal Swing and Richie Kavanagh, the better!

7. The language. I’m not fluent in it and really wish I was it. There’s no denying it’s beautiful. And I just love Hairy Baby clothing, mixing the language and humour together! I have this hoodie.

8. The towns, the villages, the historical sites and the scenery. Ireland is just so beautiful and last year I had a great time exploring new places. Hopefully I’ll get the chance to try again this year, like I did last year.

9. Swimming in the rain because it’s warm, whippy ice creams, how being called a bollix can actually be affectionate, lockins, using jumpers as goal posts as children, First Communion, The Debs. So many things that are small but are so Irish in some ways.

10. The people. I truly believe we are some of the friendliest people in the world. It can be a pain when you live in a small community and everyone knows your business before you do but if you’re lucky you’ll live in a close community. We’re not called the Land of a Thousand Welcomes for nothing! We sure know how to have the craic.

I’m sure there are millions of other things I could list but I decided to stop there. I hope you enjoy your day, where are you are in the world and whether or not you are celebrating. Just as long as you’re not calling it St. Patty’s Day!! 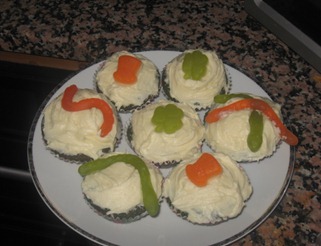 The first time I tried red velvet cake was at Christmas time and it was divine! I’ve been wanting to make it ever since but haven’t gotten around to it. I remember seeing on Bakerella’s blog a post of green velvet cupcakes and thought St. Patrick’s Day would be the perfect time to make it! I’ll go back soon and add in metric measurements as well. I actually used cups though when making these (though I generally don’t like doing that). I also halved the icing amount as I had half a bowl left after. The icing was pretty sweet, so you could reduce the sugar if you wanted. 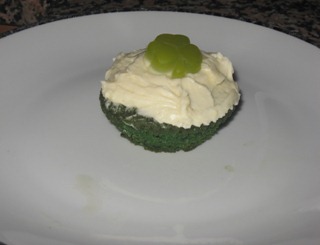 2. Add all liquid ingredients to one bowl, stir and set aside.

3. Sift all dry ingredients into another bowl and stir to mix. Add the wet ingredients and mix using medium-high with a handheld mixer (or in a food processor).

4. Add mixture to the liners and bake for 30 minutes (or until a toothpick inserted into the centre comes out clean).

5. Remove when ready, leave to cool for 10 minutes before taking out of the pan and transferring onto a wire rack to cool completely.

6. Make icing. Cream butter and cream cheese together in a bowl. Add vanilla. Sift in the sugar in batches and mix. 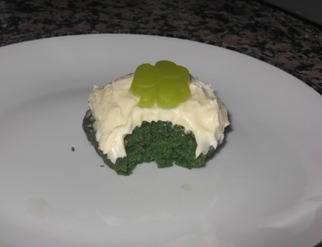 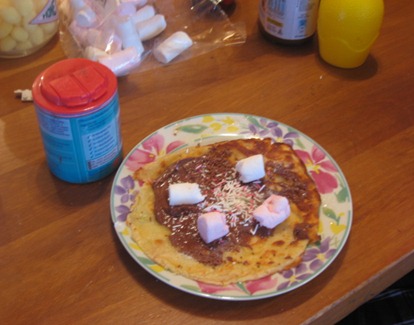 So yesterday was Shrove Tuesday (Mardi Gras/Fat Tuesday to my readers across the pond!), but here in Ireland we tend to call it Pancake Tuesday or Pancake Day. Shrove Tuesday was traditionally the last day of feasting, a way to use up eggs, fat and sugar (all the good stuff!), before Lent and fasting started. If you grew up in Ireland, you’d of course know this but honestly it’s really all just about the pancakes. Pancakes for breakfast and lunch if you were lucky and PANCAKES FOR DINNER!!! As a child, there was nothing more exciting than having pancakes for dinner. As an adult, nothing much has changed! And ya ya, of course you can have pancakes on any day of any week if you wish but there’s something magical about Pancake Day!

I am rubbish at making pancakes. I remember trying in second year of college. I’d convinced my French housemate to make them (under the allusion that surely she must be good at making crepes if she’s French!). They didn’t work. Next up was my American housemate, they didn’t work either. I gave it a whirl and after a whole jug a batter, we each got one tiny pancake! This year I was making them for 7 people in my house, including myself and didn’t want a repeat performance from that year. So I went off on a hunt and decided to use the recipe I found on Mammy’s Kitchen as well as following some of the helpful guidelines I found on Babaduck Babbles. And it worked! Well, the first one or two pancakes weren’t great but after that they were fine! And quite tasty too! I doubled the batter as well to feed everyone at mine. 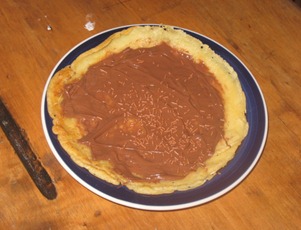 1. Sift the flour into a bowl (or into the bowl of a food processor). Add the remaining ingredients and whisk until smooth

2. Heat a frying pan on medium heat with a little oil (or butter, which I use. But be careful not to let it burn). Using a ladle, pour batter into the pan and swirl to distribute evenly. Once bubble appear on the surface, flip or turn over to brown the other side.

3. Serve with toppings of your choice! I love sweet pancakes, so I like to use things like Nutella, golden syrup, ice cream and marshmallows (not together mind you!). You can also make savoury pancakes with things like cheese, ham, onions etc. Though sometimes I just like to keep it simple with a sprinkle of sugar and lemon or just a small amount of butter.

They are so simple to make and can be whipped up using pantry items. I must remember to make them more often as they are so delicious! 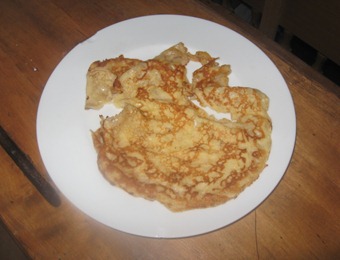 One of the flops above! Or smushcakes as I call them 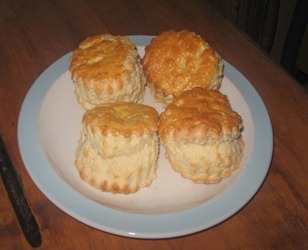 I’ve been so busy and uninspired when it comes to blogging these days. It doesn’t help that I’ve discovered 30 Rock and any free time is spent watching that. I have loads I want to talk about but when I sit down to do it, my mind goes blank. Forgive me!

Two weeks ago I woke with an unbelievable craving for scones. Brown scones specifically. I used to eat one everyday when on work placement and nothing beats a warm scone that slightly melts butter! 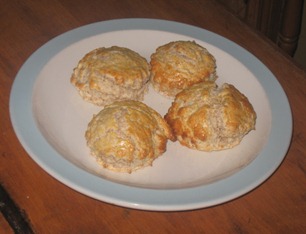 3. Add enough milk to make a soft dough. Turn onto floured surface and knead to remove any cracks.

4. Roll out lightly to a thickness of 1 inch. Cut scones with a cutter dipped in flour.

5. Place on a floured baking tray and brush the scones with the beaten egg.

6. Bake for approximately 10 minutes and allow to cool slightly on a wire rack. 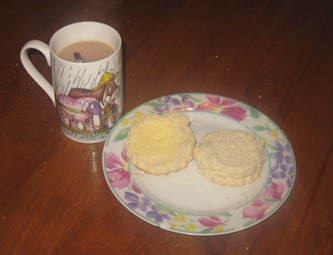 Tea and scones, how very Irish! Except, if I may quietly confess…… I’ve never had a cup of tea before.