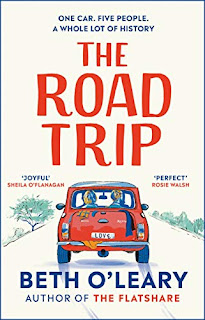 Addie and her sister Deb have just set off early in the morning, for the long trek to the Scottish countryside for their friend Cherry's wedding. They expect it'll be a fun road trip, (even if they are giving a lift to stranger Rodney who is also going to the wedding) with plenty of time to get to the day before the wedding BBQ. However the plans changes when early into the trip, there is a fender bender with another car. Unfortunately, the two people in the other car are Addie's ex Dylan and his obnoxious best friend Marcus! Both of who she hasn't seen since her relationship ended and who are also going to the wedding. With Marcus and Dylan's car now out of action, they squeeze into Deb's Mini Cooper so they can all reach the wedding on time. But this road trip turns out to be anything but easy!

The plot has two parts: the current timeline of the gang trying to make it to Scotland on time as well as the flashback timeline which starts at Addie and Dylan meeting and works it way up to their breakup. Addie and Deb were working as housekeepers in Cherry's family's French villa, which was being rented out to wealthy families. Dylan ends up staying there and this is where he and Addie start their relationship. This setting, as well as the road trip plotline, makes for a fun summer book. Living in the French countryside and being on a road trip are two very summery things in my mind, so I really enjoyed reading this book, outside in the sun. I liked the road trip element a lot, there's lots of things that go wrong, I also like the tension of two exes being forced to share this small space and reflect on their relationship. Rodney, being a bit of an odd character and also a stranger to the others, adds an element of comedy and bizarreness. I found the flashback plot a lot slower at times, it's obviously needed to show why the couple broke up but it slowed down the road trip plot, which I felt more invested in. Overall I liked the characters though Marcus confused me a bit at times, how nasty he is to Addie felt almost unwarranted. I felt like compared to The Flatshare and The Switch, this book didn't have as much charm and feel good energy. I do think that if you liked Beth O'Leary's other books, then you'll enjoy this one as well though, the road trip portion is super fun

I received this ebook free from NetGalley in exchange for an honest review. I am not required to post a review on here and all thoughts are my own
Posted by Breige at 10:00 AM