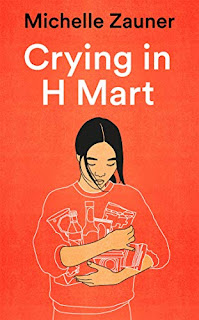 Crying in H Mart has received a lot of attention and hype online and there's a good reason for this. In Michelle Zauner's memoir, she tells us what it was like growing up as the only Asian American in her school, her often strained relationship with her mother (which was more relaxed the summers they spent in Seoul at Michelle's grandmother's house) and life since her mother was diagnosed with pancreatic cancer when Michelle was 25 years old.

Zauner is unflinching at times when discussing her mother's illness and the devastating effects on her family, the book is so raw and brutally honest. It shows the difficulties of being a carer for someone who is sick and the states you nurse them through. There is also tenderness and love, as well as humour to lift the mood at times. The title of the book stems from the H Mart shops in America, a brand of Korean supermarkets. Zauner speaks a lot about Korean food, the role it played in her life growing up and as an adult, to her mother's relationship to it during her illness, as well as how Zauner has used it after her mother died as a way to help process her grief, stay connected to that side of her culture and find comfort. A tough read at times but an interesting one