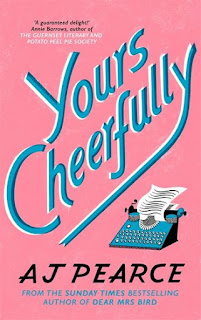 Yours Cheerfully by AJ Pearce is a follow up novel to Dear Mrs Bird and picks up back in World War II London with Emmy Lake, who works for Woman's Friend magazine. The Ministry of Information has tasked the women's magazines of Britain to promote women workers for the war effort, something Emmy is thrilled to take part of and promote. However when Emmy and her friend Bunty are on a train one day, they start chatting to a young single mother and they discover that the reality of women working is a lot harder than Emmy expected. This leaves her torn as she feels it is her duty to encourage women to work but she feels guilty that she can't be one hundred percent honest about the realities. Can Emmy find the balance between being patriotic and also being a supportive friend?

I enjoyed this book just like I did the first book. They are a tonic, full of pep and jolliness, even when there are some harder storylines being tackled. This was an easy going read, though at times it did feel a bit slow and dragged more than the first book. We don't see any of Emmy's work at the fire station in this book, it mainly concentrates on her role in Woman's Friend, as well as her friendships and her relationship with her boyfriend Charles. I liked the setting and seeing a more female focused view of World War II and the realities that these women faced at home and in the workplace. A charming, if not almost overly sweet at times, story.