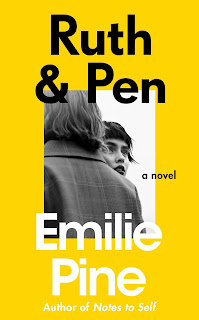 Ruth is a 40 something year old on the brink of her marriage collapsing. Pen is 16, on the verge of leaping into the dating world, she wants to ask her friend Alice to go on a date. Set during the duration of one day in Dublin in October, the paths of these strangers cross as they struggle with the decisions facing them throughout the day

I loved Emilie Pine’s memoir Notes to Self, a collection of personal essays. So I was really looking forward to this debut novel and it did not disappoint. She captures the characters perfectly. For Pen, the awkwardness of being a teenager, navigating your first big crush, pushing boundaries, being grown up. As well as her life before and after being diagnosed with autism. For Ruth, the sheer exhaustion of being in a relationship that looks destined to fall apart, after repeated failed attempts to IVF. Most of the POVs are from Ruth or Pen, but we also get them from other characters such as Ruth’s husband Aidan and Alice, Pen’s crush, which I really enjoyed. It rounded out the story, so it wasn’t all one sided

Notes to Self tackles infertility & pregnancy loss and this is reflected in Ruth’s story. Pine’s own experience adds authenticity, Ruth’s experiences are so raw, her husband’s desperation so painful, it really punches you in the gut. I loved Pen’s relationship with her mother, how her mother really tries to understand Pen, support her while clearly not wanting her to get hurt

One of my favourite reads of the year so far, I can’t wait to see what Emilie Pine does next!