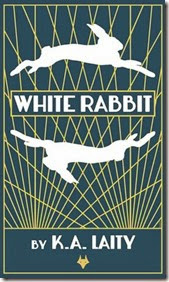 It was the cover that first drew me to this book! It’s just so simple but beautiful, Art Deco like. The next thing that intrigued me was the fact it was about a detective and after having just finished The Silkworm and Mr. Mercedes, I was in the mood for another detective based novel. Though it certainly didn’t sound like the average detective novel! James Draygo is a disgraced, ex-detective with a drug habit, who has taken over his aunt’s psychic business and is pretending to be a fake psychic, despite the fact he has real psychic abilities! When Peaches, trophy wife of her soon to be ex-husband, comes to Draygo for help on digging dirt up on her husband, she is shot dead in front of Draygo and he is left holding the gun. He discovers his bail has been covered by journal Saunders, who he reluctantly gets stuck helping with her inquiries into the White Rabbit and The Warren,a long with Draygo’s mute assistant Jinx.

I really liked this book. It has a twist on a detective story, with the slight supernatural elements to it. You might think that a mash of detectives and ghosts don’t work but it does! Peaches is a fun character, both in person and as a ghost. Draygo is a flawed protagonist, he’s more of an anti-hero really. Retired (and a big mark on his career that we find out about), he has a big reliance on all sorts of drugs, including alcohol, oxycontin and ‘Fairy Dust’. You’re left wondering throughout the book whether this whole investigation will completely ruin him and cause him to have a breakdown or if he’ll finally get his act together. He is very witty and I liked the banter between himself and Saunders. Jinx was another favourite of mine, despite the fact he never speaks! The book is short, less than 200 hundred pages, but it’s snappy and to the point, it doesn’t need extra pages. It held my attention and I loved going back to read it, found myself looking forward to it picking it back up again. However, even though it was a short book, there’s no chapters or breaks along the way, which I’m not a fan of as I generally like to stop after ending a chapter. That was the only real downside for me.

If you like both fantasy novels and mystery novels, you should give it a go, you might be pleasantly surprised. A witty, fun quick read!

This book was received from NetGalley, which I am under no obligation to review unless I want to!